Most people reading this will not need an introduction but there is no harm in a reminder. Charles Messier (1730-1817) was a French Astronomer who published his now famous catalogue consisting of 110 Nebulae and Star Clusters primarily to help observers, such as himself, distinguish between permanent night sky objects and transient objects, primarily comets, which he was hoping to discover.

The catalogue itself has been the subject of much research about duplicated objects etc., but over the intervening years it has become a standard reference catalogue with many books etc being written about the objects and how to find, observe, image them etc. Many images in the Members’ galleries are substantial witness to this…….. Indeed, most of us know exactly what M45, M31, M51 means and so on.

Although each object can be well observed at differing dates and times throughout the year it is the case that all the objects can be seen during the course of one night’s observing.

It is at this point that I will state that I am perfectly aware there are various opinions about the challenge. All I would ask here is to take this in the spirit for which it is intended, i.e. a challenge for those who are interested in doing it. If you are not one of those people, then please move on to other topics that do interest you.

There are several factors to consider, your Location, the Season, the duration of night-time hours.

Although the Marathon can be attempted from any Northern Latitude, Messier compiled most of his Catalogue from Paris, low Northern Latitudes are best, 25 degrees N probably optimum. Several objects, M81, M82, M52 and M103 are difficult from the Southern Hemisphere, being 60 degrees N or more.

At the latitudes mentioned, particularly 25 degrees, there is a period around the Spring Equinox, especially when there is a New Moon, when it becomes possible, by observing from dusk to dawn, to see all the Messier Objects. Less complete marathons can be done at other times and locations. This year, 2021, the date Saturday 13th March, is considered the ideal day, or a few days either side, whilst the Moon is not hindering with its light.

You need to begin at Sundown and continue throughout the night observing the Objects in a certain order, to allow for objects sinking below the horizon in the West and rising as dawn approaches in the East. Good horizons to the East and West will aid this process.

I am not going to go into the multitude of ways the location of each object can be found. I will leave that to the observer. When I did it I used an LX200 8 inch GOTO. I saw 101 out of 110 objects. Others may prefer to use different  methods. This is a personal choice. There are gaps when you have run out of objects and are waiting for certain to attain enough altitude and which allow for a little rest.

I show here the order in which the objects should be attempted. Your location, weather etc may affect the number of objects you see but then this can be a challenge in its own right. 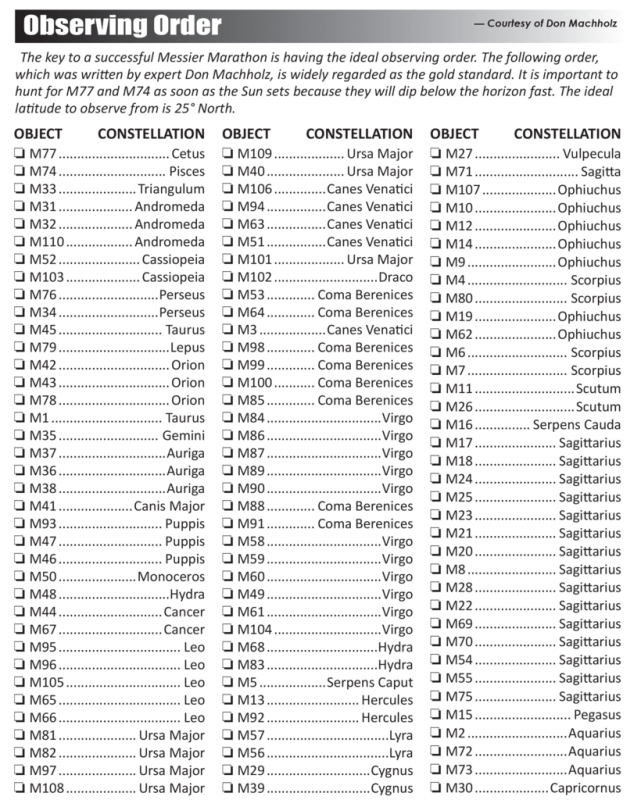 The list shown is the one devised by Don Machholz, an acknowledged expert on Observing the Messier Marathon and who has written several books on it.

Best of Luck. Any results are welcome within the Member Galleries, sent to the Deep Sky Section or on the Forum.