Observation by Robin Leadbeater: Potassium absorption during the 2009-11 ...

Potassium absorption during the 2009-11 eclipse of epsilon Aurigae 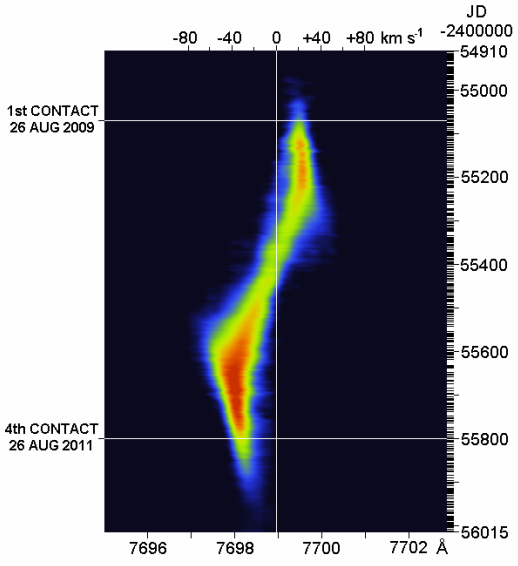 Epsilon Aurigae is an eclipsing binary system where the primary is a star with spectral type F and the companion is an extended object undetectable at visible wavelengths outside eclipse.  Every 27 years this object, (which appears to be a dusty rotating disc seen almost edge on, with an unseen central star) produces a 2 year long eclipse of  the primary.

This graphic shows the evolution of a Potassium absorption line in the star's spectrum at 7699 Angstrom during the 2009-11 eclipse. The line is produced by the starlight from the primary star shining through and being absorbed by the material in the disc and  is only seen during eclipse. The line can therefore be used to track the properties of  the absorbing material in the disc slice by slice as it passes in front of  the background star.

The graphic is made up of 275 high (0.35A) resolution spectra of this single spectral line recorded on average approximately every 4 days using a LHIRES III spectrograph fitted with a 2400 l/mm grating and specially modified to reach the K7699A line in the infrared. The false colours represent the degree of absorption, increasing from blue to red  and the x axis shows the radial velocity of the disc material (based on the Doppler wavelength shift).

The graphic shows the full extent of the disc material extending well beyond the opaque region which causes  the brightness drop (indicated by the first and last contact points).  The speed and direction of rotation of the disc is clear from the radial velocity, with the leading edge of the disc, seen during the first half of the eclipse, rotating away  from us and later the trailing edge rotating in our direction.