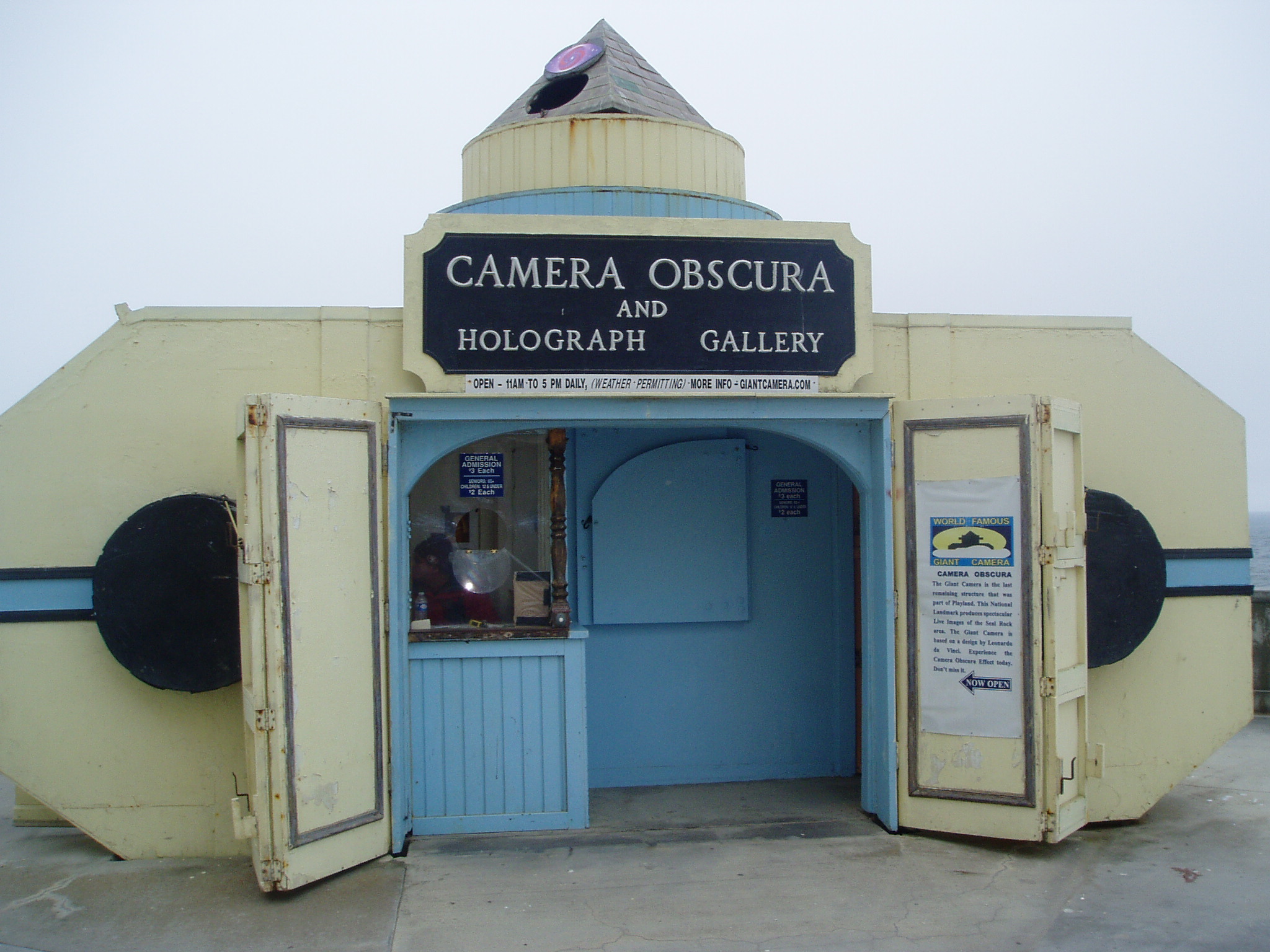 The north end of San Francisco’s Ocean Beach is overlooked by the Cliff House, which hosts a restaurant and bistro. On the lower terrace of the Cliff House is one of San Francisco’s oldest tourist attractions – the “Giant Camera” camera obscura. It dates from 1946, when the land behind Ocean Beach was the site of the Playland, a fairground remembered fondly by older inhabitants of the city. The camera obscura was built by Floyd Jennings, and George K. Whitney, the owner of the Cliff House, suggested building it to look like a giant camera. As the word, and indeed the very idea of, a “camera” comes from camera obscura, Latin for “dark chamber”, this was an inspired idea.

The building measures 25ft x 25ft. You enter past a kiosk, which sits where the lens would be on a real camera. In the Cliff House camera obscura, the light enters through a turret on the top. A 10 inch diameter mirror diverts light downwards through two 8 inch diameter plano-convex condensing lenses, focussing the image of the outside world onto a parabolic screen 12 ft below; this gives a magnification of 7 times. It’s difficult to explain to those who haven’t visited a camera obscura how captivating that image is.

The mirror can be rotated, so the camera has a 360 degree field of view, but the best vista is out to sea, in the direction of the Seal Rocks, where one can occasionally see seals. I’m also told that the camera is a great place to watch out for the Green Flash at sunset. Unfortunately the day we visited, one of San Francisco’s notorious sea fogs was in progress, so although we could see the rocks, and along the beach, light levels were low and not showing off the camera to its best.

Nevertheless I was delighted to visit this wonderful attraction, which I have known about for more than twenty years. These days it is a National Monument, on the National Register of Historic Places. It was a pleasure too to talk to the camera’s curator, Robert Taccheto, who has run the attraction since 1995. You can see a video of him demonstrating the camera at http://bcove.me/t0h9809e

California has a number of other camera obscuras, though none is of quite such historical importance. A recent addition to the roster is in the Exploratorium, San Francisco, which, I’m told, has a great view over San Francisco Harbour, Alcatraz and the Golden Gate, fog permitting.  I did manage to take a quick snap of the camera obscura located on the seafront (Ocean Ave) at Santa Monica, as we swept past on a bus tour of Los Angeles. Finally, no visit to LA’s Griffith Observatory would be complete without a view from the observatory camera, built by George Keene of Tehachapi CA (see www.cameraobscuras.com).

If you ever find yourself in the Golden State, take the time to visit one or two of them!

Steve Harvey,  Jeremy Shears,  Carolyn Kennett ,  Nick Hewitt,  Peter Carson,  Alan Thomas
Copyright of all images and other observations submitted to the BAA remains with the owner of the work. Reproduction of work by third parties is expressly forbidden without the consent of the copyright holder. By submitting images to this online gallery, you grant the BAA permission to reproduce them in any of our publications.