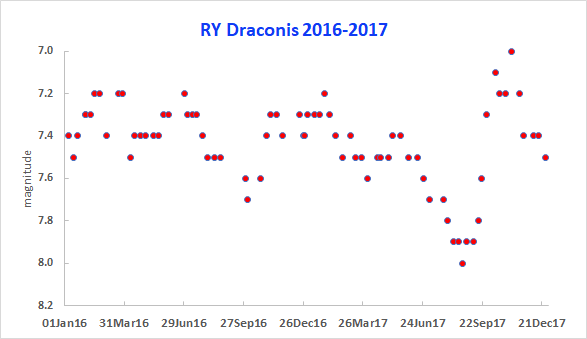 Here is my light curve for the semi-regular variable RY Draconis during 2016 and 2017.

The period of RY Dra is usually quoted as being around 300 days, but the ups and downs during 2016-2017 suggest something shorter.

Jeremy Shears,  Peter Mulligan,  Peter Carson,  Graham Winstanley,  Andy Wilson,  Ray Emery
Copyright of all images and other observations submitted to the BAA remains with the owner of the work. Reproduction of work by third parties is expressly forbidden without the consent of the copyright holder. By submitting images to this online gallery, you grant the BAA permission to reproduce them in any of our publications.