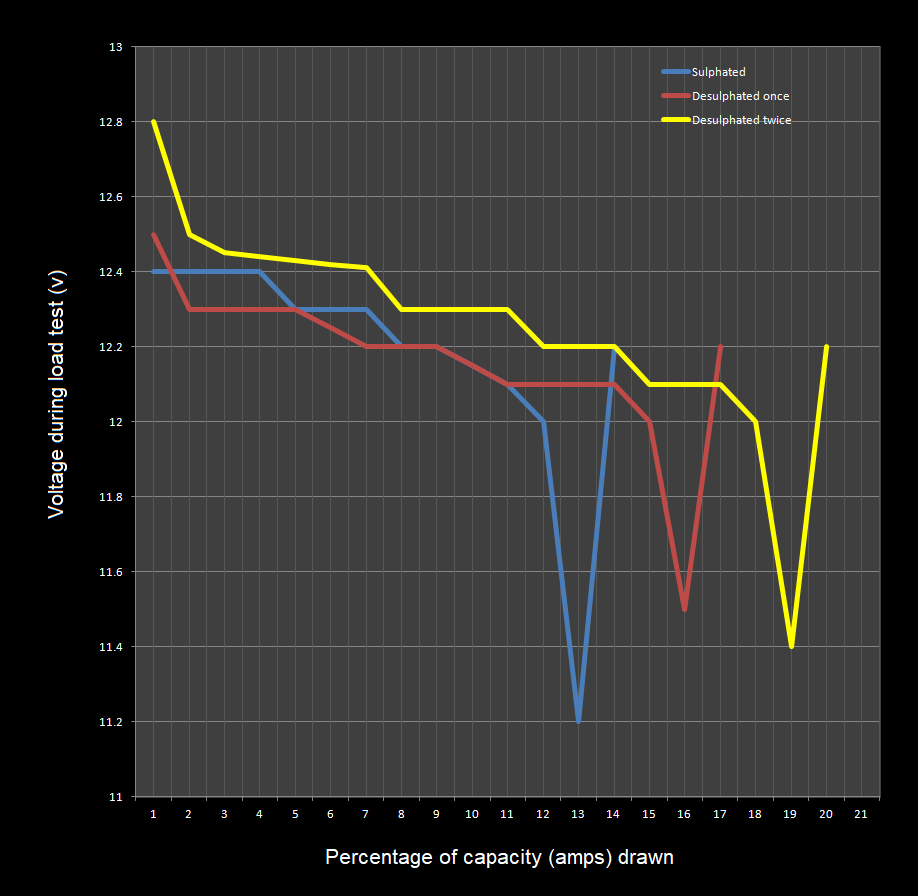 We have no mains electricity at our local society's observatory, and one of my jobs is to source cheap batteries to keep the lights on. We've got some deep cycle batteries for the scope, but use old car batteries for the LED lighting and for running laptops or other kit. I'd recently got hold of a nice looking 72 amp hour lead acid battery from my friendly garage for a fiver, and despite having been left in the corner of the garage for 6 months it had a resting voltage of 12.6v so I thought it would be a goer. I'd already got a device to load test batteries, which can be used to apply a load of between 0-10A, so I fully charged the battery and ran the load tester on it at a constant load of 4 amps.

Observing the voltage during the load test I noticed the voltage plummeted once the battery had discharged about 8 amps (11-12% of its capacity). I'd seen from watching the voltage of other batteries that this seemed premature, as other similar batteries (in fact both bigger ones and smaller ones) manage to discharge about 20% of their capacity before the voltage takes a nose dive.

My mate told me about his new battery charger which had a desulphation mode. We were both skeptical thinking it must be a faddy add-on and little use for rejuvenating an old battery. Anyway, we ran it through the desulphation cycle and I re-tested it under the same conditions and there was an improvement; the voltage only started to plummet once the battery had discharged 11 amps (15% capacity). I ran the desulphation cycle once more and the voltage plummeted when it had discharged 13 amps (18% capacity), and now the battery appears to function as well as the other batteries in the pack.

I'm going to now leave it fully charged for a week and re-test again to make sure these improvements are not just transient. Not a very interesting story, but so far this shows that the desulphation routine does appear to work to an extent on at least some batteries.

Jeremy Shears,  Ray Emery,  Graham Winstanley,  Peter Carson,  Carolyn Kennett ,  David Salmon
Copyright of all images and other observations submitted to the BAA remains with the owner of the work. Reproduction of work by third parties is expressly forbidden without the consent of the copyright holder. By submitting images to this online gallery, you grant the BAA permission to reproduce them in any of our publications.