Observation by Paul Leyland: An experiment in super-resolution, part ...

An experiment in super-resolution, part 2 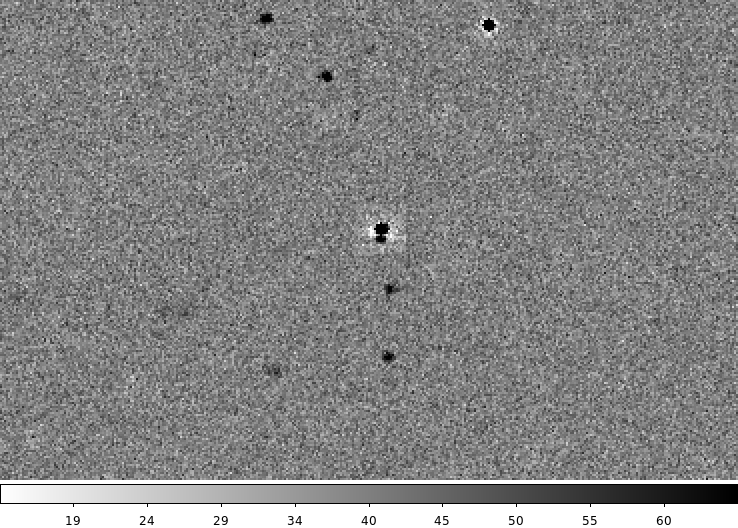 https://britastro.org/node/19348 shows my first, quick, and dirty attempt at super-resolution.  Since then I've implemented the CLEAN deconvolution algorithm.  See https://en.wikipedia.org/wiki/CLEAN_(algorithm) for an introduction and links to further reading.  2000 iterations with a gain of 0.1, followed by a 2-pixel radius Gaussian blur of the CLEAN map and the re-addition of the residuals produced the image above.

It's markedly better than the Richardson-Lucy reconstruction produced earlier, even though it started with exactly the same raw image and PSF.  The signal to noise ratio is much better, the limiting magnitude is better and there is clear sky between the components of the double star.

The image is much easier to measure than its predecessor.  The centroids differ in RA by 0.23 pixels and in Declination by 4.93 pixels.  At an image scale of 0.71 arcsec/pixel the separation evaluates to 3.50 arcsec.  The P.A. is now 177°.

This is a very good effort and I'm interested in knowing what it is that leads to a difference of ~0.25 arcsec, measure vs Gaia? Is it the uncertainty associated with measuring the distance between star centres or the derivation of the 0.71 arcsec/pixel calibration factor, or both, or something else?

It might be interesting to try two further approaches, either individually or in concert.

1) Resample the image and the PSF onto a finer grid and deconvolve the result on to that grid.  Note there are a potentially infinite number of ways of resampling.

2) Use other deconvolution algorithms.  Both CLEAN and R-L are cheap and cheerful.  Maximum entropy, for example, may be much better but it is also much more difficult to implement.

The derivation of the 0.71 arcsec/pixel scale is almost certainly not the issue.  Plate-solving of many thousands of images, as well as computations based on simple geometry of focal length and pixel size, indicates that that figure is good to better than 1%.

Thank you for the explanation. Keep chipping away at it!

Thanks.  If you, or anyone else, would like to try their hand at super-resolution  the FITS image can be provided. An ex-colleague at Cambridge University has already expressed interest at giving it to his students as an exercise in signal processing.  Until now he's used synthetic data.

Those numbers are much closer to my measurements of the RL-processed image than those from Gaia-DR2.

Not sure what to make of this.