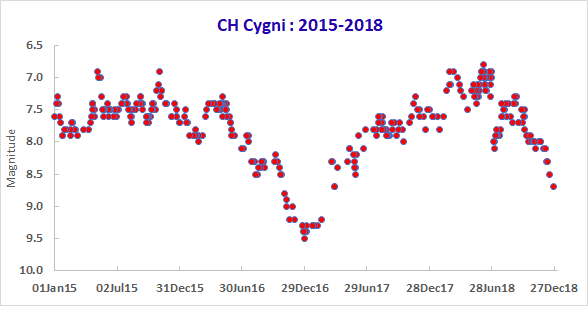 This is my light curve for the star CH Cygni since the start of 2015.

One of the stars in the CH Cygni system is an eruptive variable that shows erratic brightness changes. The system also contains another star that shows semi-regular variations.  At some times it will be the erratic variations that dominate CH Cygni's light curve; at other times the semi-regular variations dominate. It has even been suggested that some of the deeper fades over the years might have been related to eclipses, but no clear evidence has been found for this

Various periods have been reported for the semi-regular variations, including 97 days, 725 days and 4700 days.

Very interesting and complex light curve. This symbiotic star has similarly complex variations in its spectrum. In 2015, early in my spectroscopic learning curve I captured a couple of spectra of CH Cygni which I compare in the attached image. I think that it has been the subject of regular spectroscopic campaigns