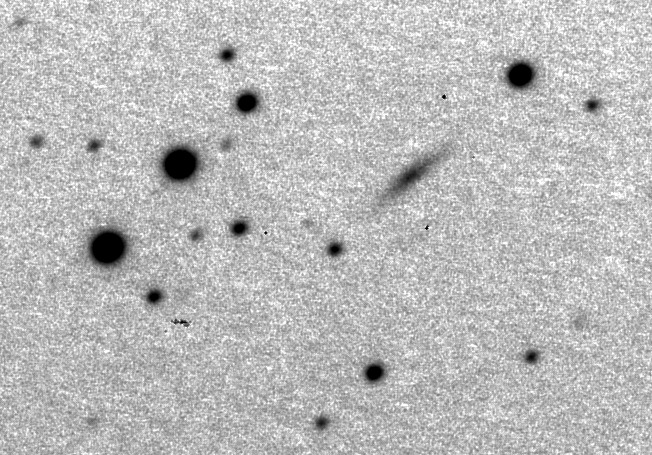 I've often noticed a background galaxy in the field of SV Ari but never paid it much attention.  A week or so ago the VS was too faint to be detected --- below 19.9 in V.  This time, though, I looked at the galaxy properly.  As can be seen, it's a nice edge-on spiral with a prominent equatorial dust band and a nuclear bulge.  Not much has been found about it on the web, other than its position, catalogue number and near-IR magnitudes.  A fairly poor image appears in the DSS2 and shows the galaxy to be rather red.  I used  APT with a 23x6 arcsec aperture to measure its integrated brightness at V=16.46 +/- 0.05.  The catalogued magnitudes are J=12.947, H=12.060 and K=11.690, in line with its apparent redness.

The red shift seems not to have been measured.  It may be a little too faint for the spectroscopists here but it would be a worthy challenge in my opinion.  At least it is high in the sky for a good number of hours each night for UK observers.  Assuming it is about the same size as M31, M51 and the MW, which have absolute magnitudes of -21.5, -21.1 and -20.9 respectively, its distance modulus becomes around 37.5 which suggests a distance of around 300 Mpc.  Assuming my arithmetic is correct, z should be around 0.09.

The subs were averaged-stacked to preserve photometric accuracy.  Median stacking would have removed the hot pixels and the cosmic ray hit south-west of comparison 165 but I wasn't interested in making a pretty picture at the time.