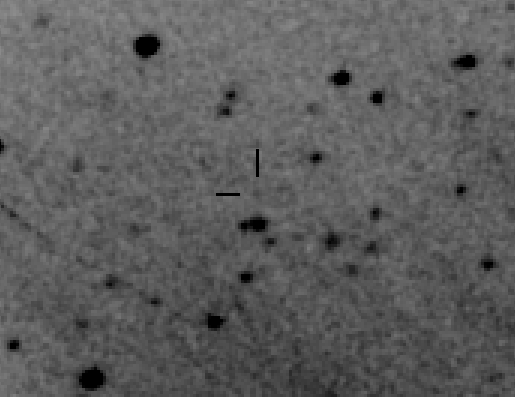 This week we feature something which is definitely NOT a "Gee Whiz" object.  Rather, this is a demonstration of what is possible using amateur equipment and a bit of clever research.  The 16th satellite of the planet Uranus (Caliban) was discovered with the 5m Hale telescope at Palomar in September 1997. It is a rather small body, estimated at only 72km in diameter, and is a dark reddish colour with an estimated albedo of only 0.04 — about half that of the Moon. No high resolution images exist because it was not discovered until long after the Voyager 2 fly-by mission.

Because Caliban is so small, so dark and so far away it appears very faint as seen from the Earth. At the time Paul's image was taken the predicted magnitude was 22.2, so a long exposure time was required to make the satellite visible at all. Luckily Uranus and its moons were near a stationary point in its apparent orbit and Caliban moved less than two arc seconds during the three hour observation, making stacking the numerous sub-images very easy. Even with an exposure that long Caliban is at the limit of detectability with the equipment that Paul is using. The signal to noise ratio was barely 3 and careful contrast enhancement was required before the satellite became clearly visible.

The object is presented in negative format to make it easier to see.