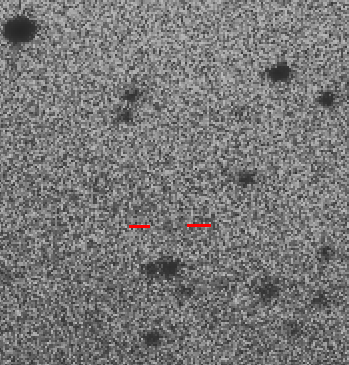 It occurred that median co-addition tends to lead to noisier images than taking the average of the subs and, further, a little gentle smoothing might improve the visibility of such a faint object.  Accordingly, although the data going into this image is exactly the same as that in https://britastro.org/node/20438, the subs are average stacked and the result smoothed with a 3-pixel diameter, 0.3 pixel sigma Gaussian function.  Essentially the same contrast-stretching was used as in the earlier image.

In my opinion, Caliban is now rather easier to see but it is still far from being blindingly obvious.

Sorry folks.  I made a cut and paste error when filling in the submission form. It has now been corrected from the initial and erroneous 1080s.  The earlier submission of the median-added image contained the correct data.

Another two hours fiddling produced a clearer image.  Rather than posting it here and cluttering the place with yet another copy of the same data I will point you to http://www.astropalma.com/Projects/Satellites/caliban.html

The differences are that I dumped some of the poorer subs (worse than average seeing or tracking errors), tweaked the contrast stretching some more, used a positive image (white stars on grey sky) and presented a somewhat wider FOV.