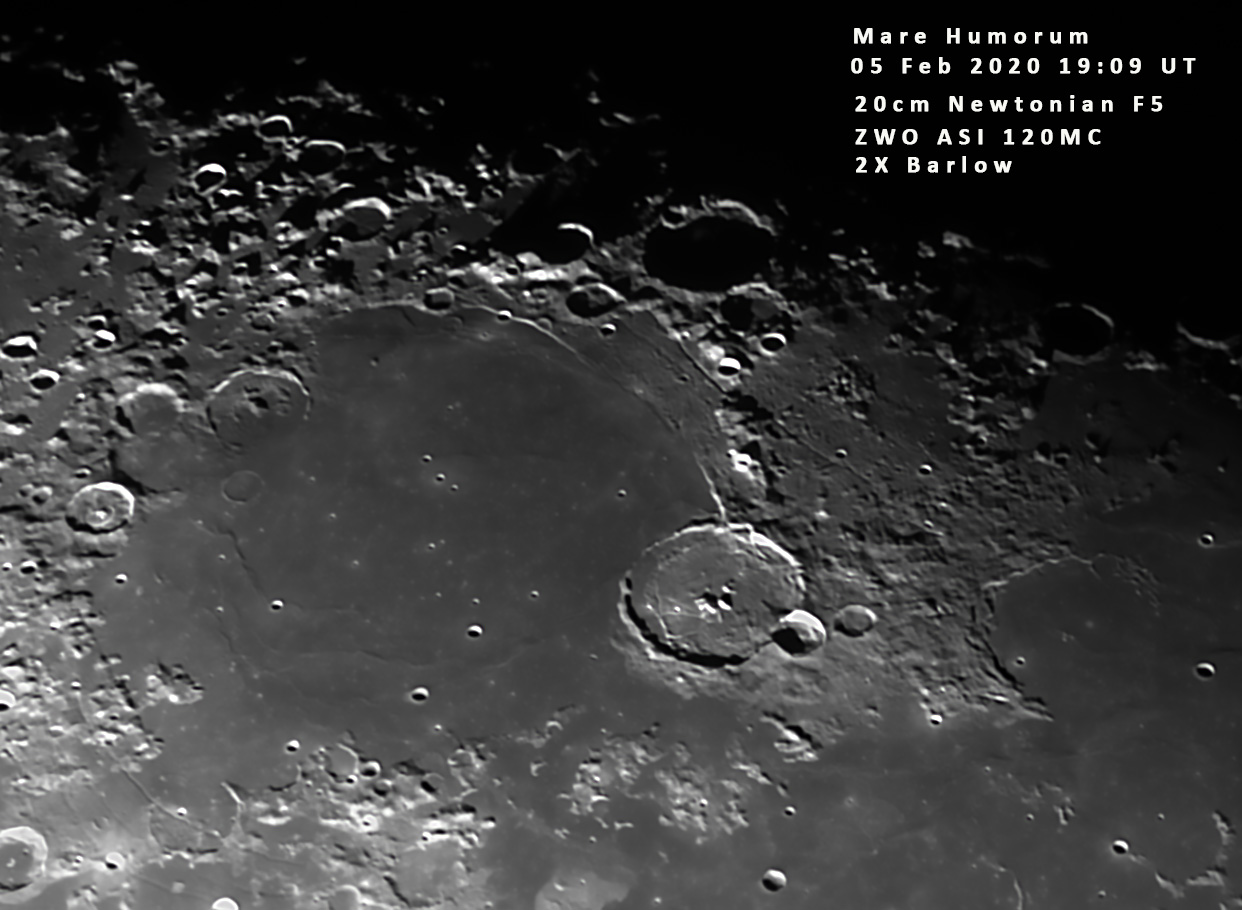 Mare Humorun: Where Craters tell the Story Of Basalt.

Mare Humorum, or 'Sea of Moisture', is a small circular mare on the lunar nearside, about 825 kilometres across. The mountains surrounding it mark the edge of an old impact basin which has been flooded and filled by mare lavas. These lavas also extend past the basin rim in several places. In the upper right are several such flows which extend northwest into southern Oceanus Procellarum.
Mare Humorum was not sampled by the Apollo program, so its precise age could not been determined yet. However, geologic mapping indicates that its age is in between that of the Imbrium and the Nectaris basins, suggesting an age of about 3.9 thousand million years (with an uncertainty of 500 million years).
Humorum is filled with a thick layer of mare basalt, believed to exceed 3 kilometres in thickness at the centre of the basin. On the north edge of Mare Humorum is the large crater Gassendi, which was considered as a possible landing site for Apollo 17.
Mare Humorum is a scientifically interesting area because it allows the study of the relationships among lunar mare filling, mare basin tectonics, and global thermal evolution to the major mascon maria – regions of the moon's crust which contain a large amount of material denser than average for that area (Solomon, Head, 1980).
Past studies (Budney, Lucey) revealed that craters in the mare Humorum sometimes excavate highland material, allowing to estimate the thickness from below the mare cover. Thanks to this, it was also possible to determine that the ‘multiring’ structure of the Humorum basin has a diameter of 425 kilometres (results based on the US Clementine global topography data).
In general, the chronology of lunar volcanism is based on the analysis of landing site samples from the Apollo and Luna missions, from the study of the relationship between the stratigraphy (layering of deposits) in different regions, and from the analysis of lunar craters – how they degraded over time and how their distribution in number and size varies over the Moon’s surface. From crater statistics, in the year 2000 Hiesinger and colleagues found that in Humorum there was a peak of eruptions at about 3.3-3.5 thousand million years ago.
Extract From A Article  By - SPACE-X Space Exploration Institute 2006

Neil Morrison,  Jeremy Shears,  Bill Leatherbarrow,  Miguel Araújo,  Graham Winstanley,  Andy Wilson,  Alan Thomas,  Martin Lewis,  Mark Phillips,  Geof Lewis,  Simon Dawes,  Andrew Dumbleton,  Stuart Morris,  Peter Carson
Copyright of all images and other observations submitted to the BAA remains with the owner of the work. Reproduction of work by third parties is expressly forbidden without the consent of the copyright holder. By submitting images to this online gallery, you grant the BAA permission to reproduce them in any of our publications.