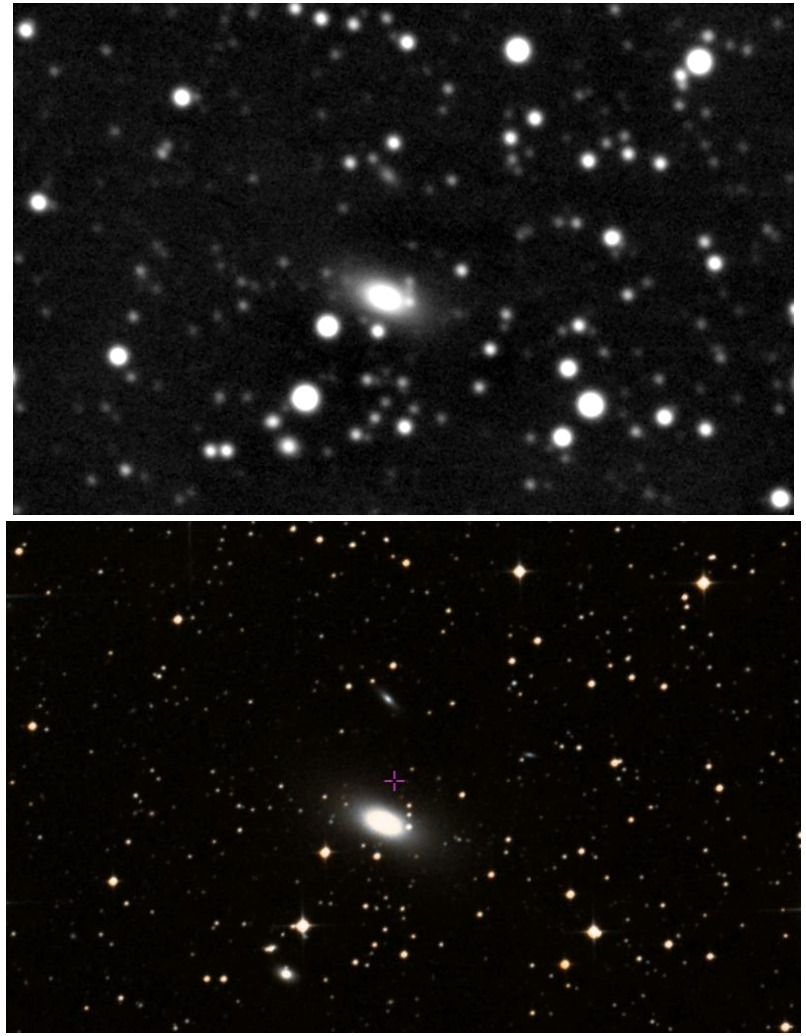 This observation was a bit of fun to see how far south it is possible to take images from Tacande.  Theoretically anything above 62S is visible but in practice the fork mount sets a limit of 47.5 degrees south.

NGC 6909 lies in Telescopium near the border with Indus and has a declination of 47 degrees 02 minutes south. It never gets higher than 15 degrees above the theoretical horizon and only 5 degrees or so above the mountain ridge to the south of the observatory.

The images above include a portion of the DSS2 to help identify the other two galaxies in the field. NGC 6909 itself is a magnitude 11.9 elliptical galaxy. Above it is LEDA 508095 at a guessed magnitude of 15.5 (no magnitude could be found in any readily available catalogues). Forming an equilateral triangle with the former two is an anonymous galaxy with a guessed magnitude of around 17.

The seeing was very poor, at about 6-8 arcseconds, when the images were taken which is why the stars look rather bloated.

That is bad seeing! From the top of your mountain I managed to get slightly further south than 62S: https://www.flickr.com/photos/nickdjames/34749184922 . Horizon depression at 2,200 m is about a degree I think.

Tacande's latitude is 28.642N, so at the surface of an airless spherical planet the southern horizon would be at a declination of 61.358S.  My figure of 62S is a convenient approximation which allows for half a degree of refraction and a bit more for an altitude of 765m above sea level.

The major problem at Tacande is that the seeing is ruined by turbulence in katabatic winds coming down from the Cumbre Vieja to the east. They are especially prevalent during a calima where hot Sarahan air (and dust) comes over. On a good night the seeing here is 2 to 3 arcsec, as it was last night.  On a truly bad night it can easily be 15 arcsec!

Those figures are for low airmass / high altitude. Seeing is almost invariably worse closer to the horizon.

One advantage of aperture photometry over imaging is that, within reason, bad seeing is not a show-stopper. Only in crowded fields does it matter (much) that the aperture and annulus needs to be set higher than in conditions of good seeing. Indeed, many photometrists at good sites purposely defocus so that the stars' images are spread over more pixels, thereby averaging out pixel-to-pixel variations in sensitivity. Essentially all my "real" work is photometry and very little is imaging per se.