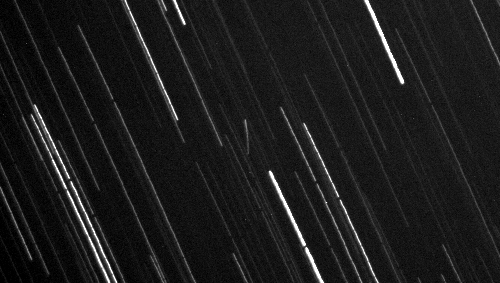 Another view of the fleeting NEO 2020SW as it became closer than the moon but before it was inside the GEO belt.

That curving motion is quite a pain when you are trying to stack nearby faint objects. Astrometrica only allows linear offset stacks which works fine in most cases but not for close objects which have significantly non-linear motion. Your stack shows the curve rather well although I think it is exaggerated since you aren't using the correct offset rate. This object was so close that the Earth's gravity significantly affected the orbit so simple heliocentric 2-body ephemerides as produced by most programs (including Astrometrica) gave poor results away from the element epoch.

Yes, I wondered about that. I typed in what I thought was the right value - but either fat fingered it, got the time wrong or misread, as it clearly turned out to not be the correct values...

I have a Perl script which I use for stacking moving objects. It takes two or more FITS images with a WCS and mungs the WCS of second and subsequent images so that a straightforward stack on the WCS does the right thing. Almost all the time a simple linear shift is adequate but it is straightforwards to run it multiple times if the motion changes significantly over the sequence. An application of the latter is chasing fast-moving satellites such as Phobos, Deimos and Amalthea.