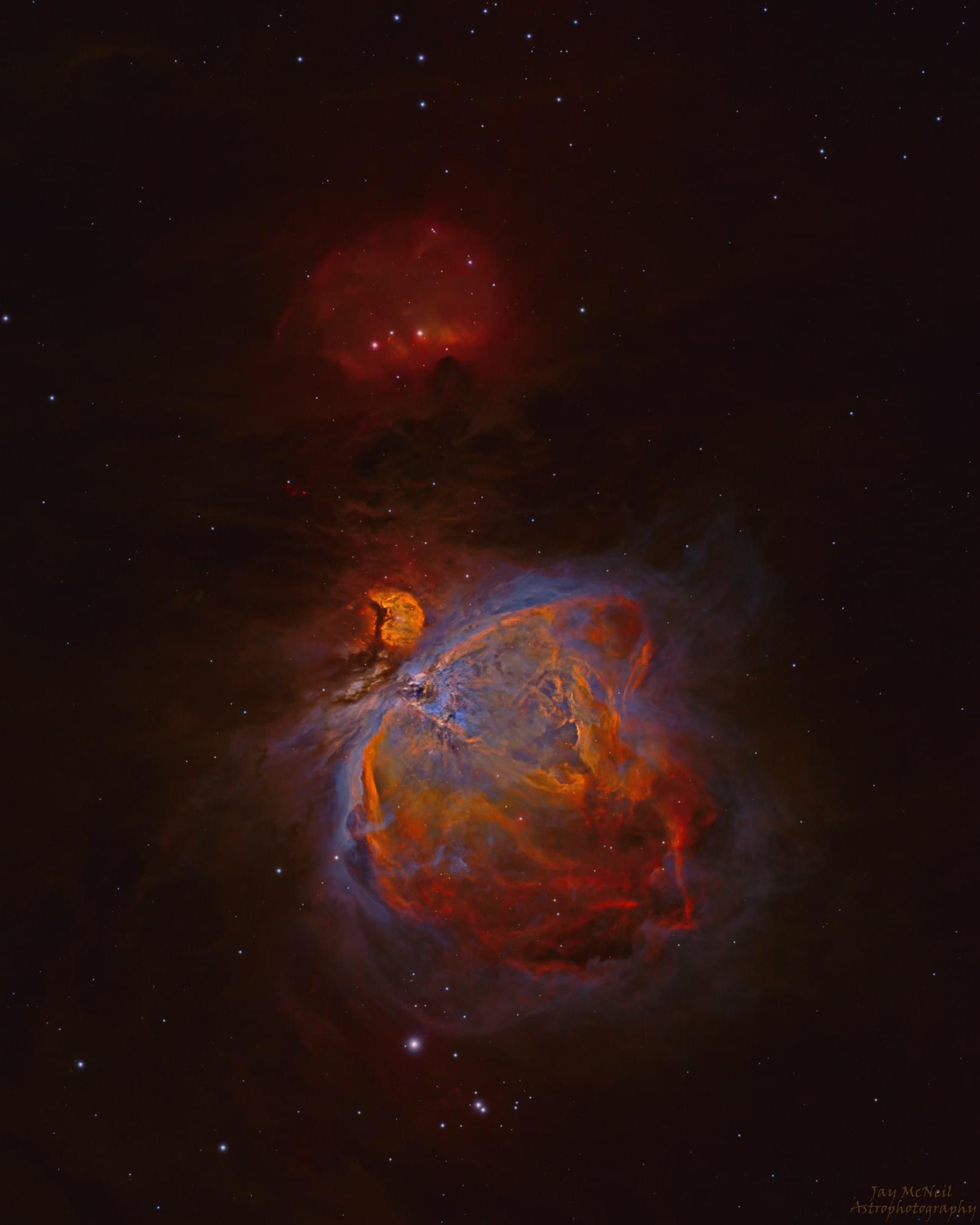 We have previously featured a PotW by Jay McNeil (discoverer of the McNeil nebula) and in this case Jay relates that the exposures were captured over a three night period, as he only has about two hours of this object being visible amongst the trees in his neighborhood.  He carefully processed each individual element's contribution to the overall image, attempting to divulge as much detail from each channel as possible before combining the master frames.

He also relates that, in the early 90's, while at Texas Star Party, he heard a research astronomer describe the Orion Nebula to him in the following way: "Imagine a large flesh-eating blister sitting on your leg.  Then, one day while you are looking at it really close, it POPS!"  The model that modern astrophysicists use to describe the morphology of this area of sky is indeed called the "blister" model.  The "blister" of the Orion Nebula is caused by the birth of several successive generations of hot, massive stars located near the dark core of the object.  This area of rapid starbirth happens to be occurring near the outer edge of a gigantic molecular cloud of gas and dust (known as the Orion Molecular Cloud)...this is occurring along the edge that is conveniently facing Earth!  One such group of young stars, probably forming about 4 million years ago, is known as the "trapezium".  These four stars can be glimpsed in this image if one zooms in near the center.  The brightest of the trapezium stars, known as Theta 1C Orionis, has a surface temperature of >39,000 C (our Sun sits at a comfy 5,500 C).  This, combined with its estimated mass of 40 times that of the Sun, makes Theta 1C some 200,000 times brighter than our very own star.  And considering that the collective stellar wind being released by the trapezium stars is along the lines of 5 million mph, this makes for a very volatile area of space!  The intense UV radiation and strong stellar winds from the trapezium stars are carving out "streams" of ionized gas as it bursts through the facing edge of the dark cloud in our direction.  This is what is thought to be responsible for the wonderful colorful streamers and filaments that we witness here as the Orion Nebula.

The "flesh-eating" part of the nebula is a dense cluster of extremely hot newborn stars located behind the formerly mentioned "trapezium" stars near the dark core of the nebula.  Due to the dense clouds of interstellar dust and the high levels of ionization, these more recently formed clusters of stars can not be seen in the visible part of the spectrum.  Infrared imaging, however, shows them clearly. As successive generations of such stars repeatedly gather dust and gas from the OMC, and then within several million years die in violent supernova explosions, the core of the Orion Nebula is quite literally "chewing" its way deeper into the Orion Molecular Cloud!

Mike Foylan
Copyright of all images and other observations submitted to the BAA remains with the owner of the work. Reproduction of work by third parties is expressly forbidden without the consent of the copyright holder. By submitting images to this online gallery, you grant the BAA permission to reproduce them in any of our publications.