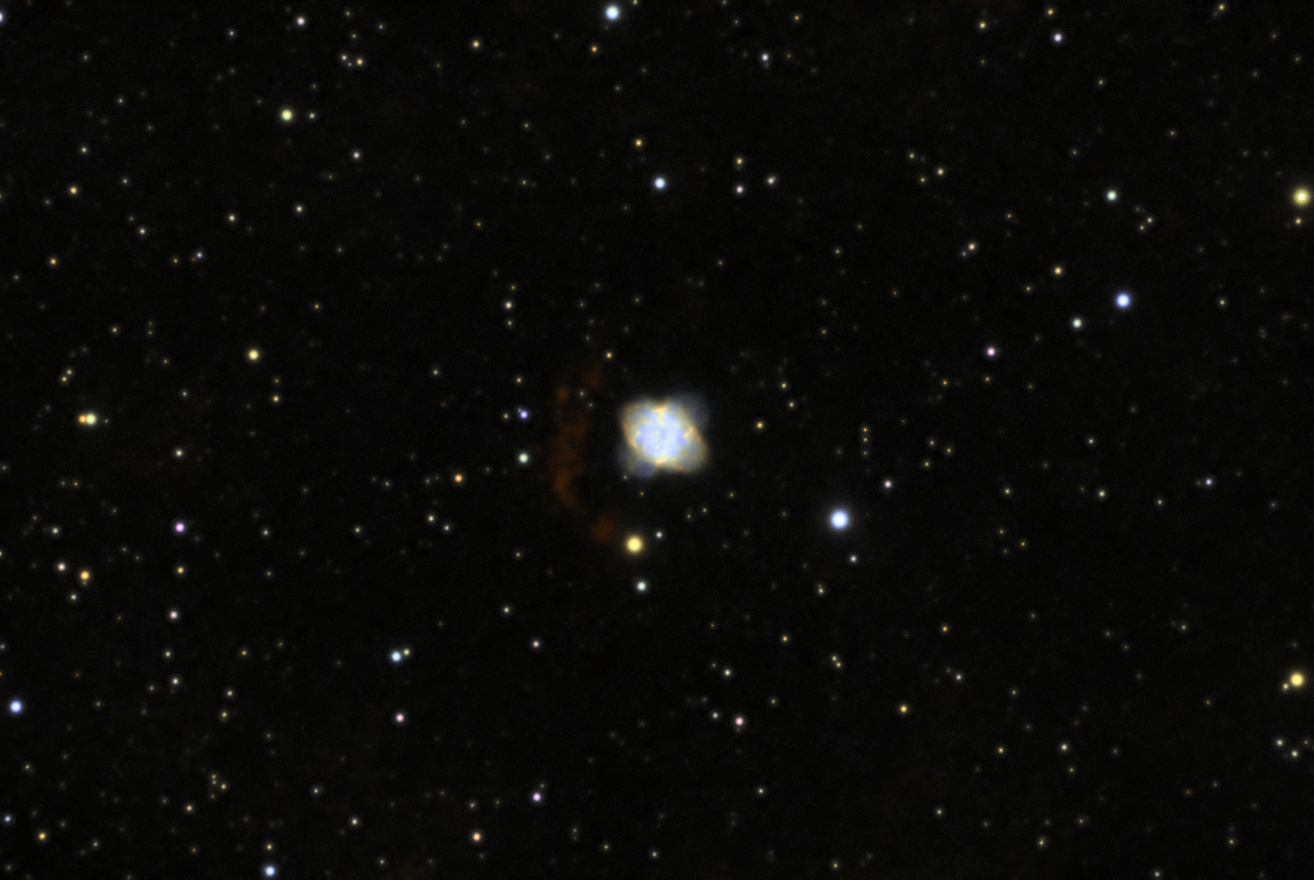 The idea here is to make the Ha strong in the red, where the N2 is weak and the N2 strong in the green where, the Ha is weak. Hopefully, this has allowed the N2 and Ha structures to be seen together, rather than having the N2 swamped by the Ha.

The arc of material that runs from the SE to the SSW is extremely faint in my raw data, but it does exist. Its presence has been detected by professional astronomers (Chih-Hao Hsia et. al, March 13th 2020, “Discovery of Extended Structures around Two Evolved Planetary Nebulae M 2-55 and Abell 2”).

Because it was so faint (just barely above the noise in my data) its presentation here has used a bit of artistic license. It shows up (just about) in the Ha, weaker in the N2 and not at all in the O3. I wanted to show this structure as it is believed to be formed from the earlier AGB wind material being compressed by the motion of the PNe through space.

On the PNe itself you can clearly see the two bipolar lobes. The lobe aligned approx. NE to SW is approx. 67.2” x 36.6” and the other, aligned approx. NW to SE is 65.5” x 34.3”. This suggests they formed within a short period of time. Where the two cross one and other we can see lumpy features, esp. in the four corners. These regions may be projection features where the two lobes interact. For some reason, the NW to SE lobe is more prominent in O3 than either Ha or N2, the opposite to the other lobe. In either case, both have a well-defined edge.

The central region is large and probably carved out by increasing thermal pressure as the PNe evolved. This object is thought to be quite old. Gaia DR2 data suggests an age of 92,191 years old. IR observations show the central cavity to be full of dust. This may be why its so difficult to make out the central star which has a mass of ~0.5 solar with a surface temperature of 55,000 K and is about 35 times brighter than our own Sun.

Jeremy Shears,  Mike Harlow,  Graham Winstanley,  John Hughes
Copyright of all images and other observations submitted to the BAA remains with the owner of the work. Reproduction of work by third parties is expressly forbidden without the consent of the copyright holder. By submitting images to this online gallery, you grant the BAA permission to reproduce them in any of our publications.