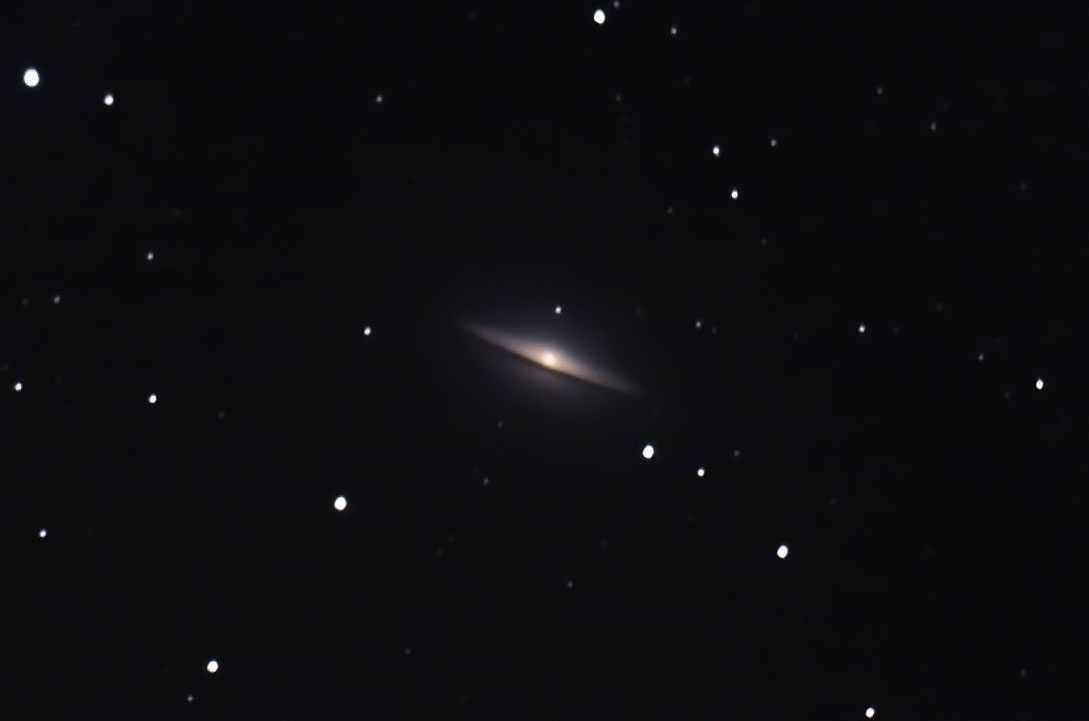 M104 also known as The Sombrero Galaxy is a spiral galaxy in the constellation borders of Virgo and Corvus,  The estimated distance from Earth is 29 million light-years.
Pierre Méchain first described the Sombrero Galaxy in 1781, but it was not formally added to the Messier Catalogue (M104) until 140 years later in 1921. William Herschel and Charles Messier were also among the first astronomers to describe it.
Equipment used:- Stock Canon 40D mounted at Prime Focus on Meade LX-90 8” telescope (focal ratio f/10 focal length 2,000mm) with a 0.63x Focal Reducer (giving an effective focal ratio of f/6.3 and focal length of 1,279mm) fitted to its field tripod by an equatorial wedge. Telescope Polar Aligned. LX-90 Periodic Error Correction enabled. Dew Removal straps fitted to telescope and operating. Telescope driven but unguided. Telescope and camera powered by Mains Power.
Exposure details:- Thirty three sub-exposures each 60 seconds taken at ISO1600. Ambient temperature zero degrees Celsius.
Processing details:- After quality control 15 sub-exposures calibrated with Dark, Flat-field and Bias Master frames before being combined in Images Plus. Further processing conducted in Photoshop CS5 and Noise Ninja. North is at the top. Image cropped to give field of view of 45 arc minutes x 30 arc minutes, also 33 arc minutes x 22 arc minutes and 23 arc minutes x 15 arc minutes.
Narrative description:- Twenty seven days after New Moon, the Moon did not rise before imaging was complete. The weather was cold, with isolated clouds and a breeze from the north east (the telescope was set up to the south west of my house). There was moderate dew. Eventually a cloud sheet rolled over obscuring the last few sub-exposures and brought the session to an end.