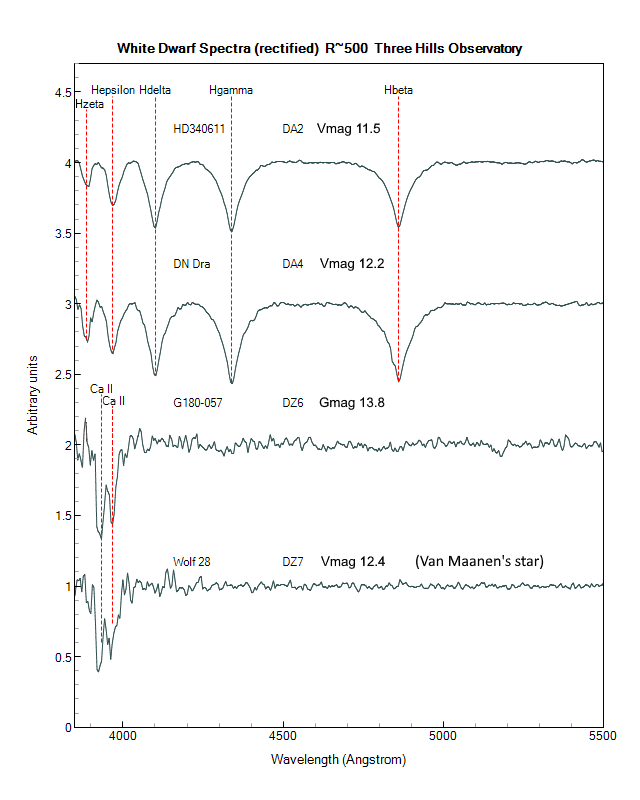 Intrigued by the stars featured in Dr Amy Bonsor’s  BAA webinar “ Planet Eating White Dwarfs “  https://youtu.be/4-JOL5NVZ4I   I thought I would try hunting some down and look for the evidence in the spectra.

Because of their small size, White Dwarfs are not very luminous so even those nearby tend to be rather faint. The brightest also tend to be the hottest and show just Hydrogen Balmer lines, designated  DA in the spectral classification scheme, while the number indicates temperature. Some cooler ones though show metal lines (designated DZ) and although fainter, a few are accessible to amateurs equipped with spectrographs. I chose two examples  showing just Hydrogen (Note how the lines are highly pressure broadened due to the extreme surface gravity) and two cooler ones showing clear Ca II H/K lines in the violet. The spectra were recorded between 2021-07-15 and 2021-08-23

The detection of metals such as Calcium in the photosphere of some white dwarfs is surprising as these heavy elements should have long ago sunk into the stars’ interior under the intense gravity. Their presence in the spectra is therefore considered to be evidence that the star has recently accreted material from its planetary system and the relative abundance of the elements gives a clue to the composition of the planets consumed. Perhaps the same fate awaits us, the only trace of our existence just a few lines in the spectrum of the white dwarf remnant that was once our Sun…

Bill Ward,  Paul Leyland,  Alan Thomas,  Nick James,  Andy Wilson,  Peter Mulligan,  Jeremy Shears,  Hugh Allen,  Mike Harlow,  Alun Halsey,  Roger Dymock,  Peter Carson
Copyright of all images and other observations submitted to the BAA remains with the owner of the work. Reproduction of work by third parties is expressly forbidden without the consent of the copyright holder. By submitting images to this online gallery, you grant the BAA permission to reproduce them in any of our publications.