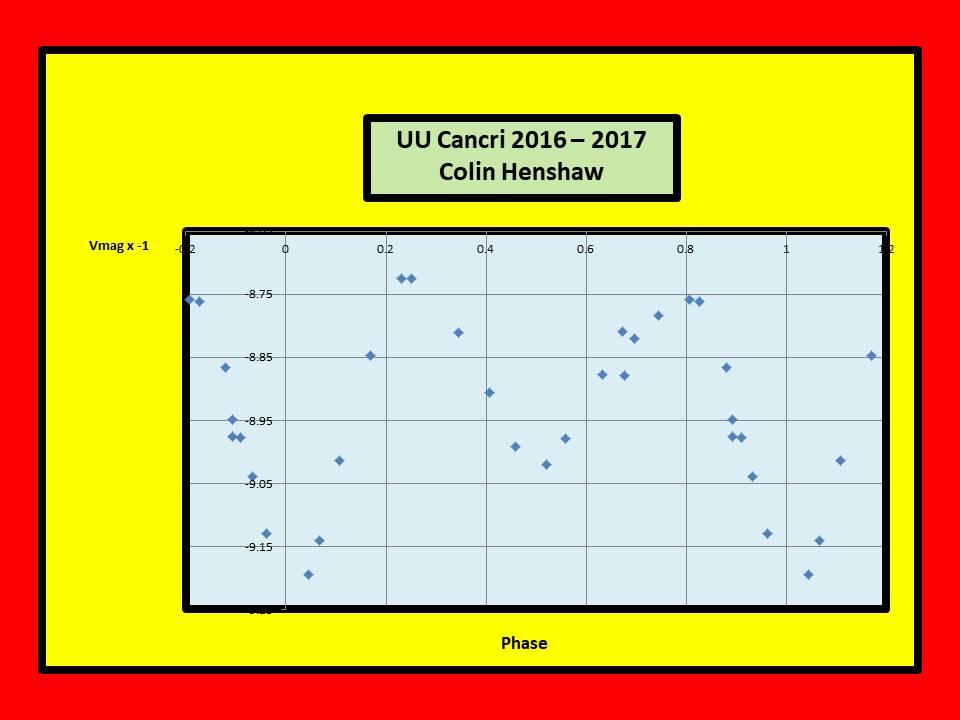 Light-curve of UU Cancri, derived from observations made between December 2016 and May 2017. UU Cancri is a low amplitude Beta Lyrae star, composed of two stars orbiting around each other, that are almost in contact and are tidally distorted into an egg shape. The star has a period of 96d.6760, (Kalv, P., Oja T., and Harvig, V., 2007), and varies between 8m.68 and 9m.35. My measurements reveal a range between 8m.74 and 9m.2, with a secondary minimum at 9m.04. The light-curve shows a classic Beta Lyrae variation in which the object is continuously varying. One of the components is a K4III giant. The system is located around 2764 light-years away. It took about a month to analyse all the images, using the AIP4Win photometry tool. The star was imaged using a Canon 6D camera set at 2000ASA with an exposure of 5 seconds, and a 135mm carl Zeiss telephoto lens set at f5.6.

Grant Privett,  Jeremy Shears,  Mike Harlow,  Paul Leyland
Copyright of all images and other observations submitted to the BAA remains with the owner of the work. Reproduction of work by third parties is expressly forbidden without the consent of the copyright holder. By submitting images to this online gallery, you grant the BAA permission to reproduce them in any of our publications.