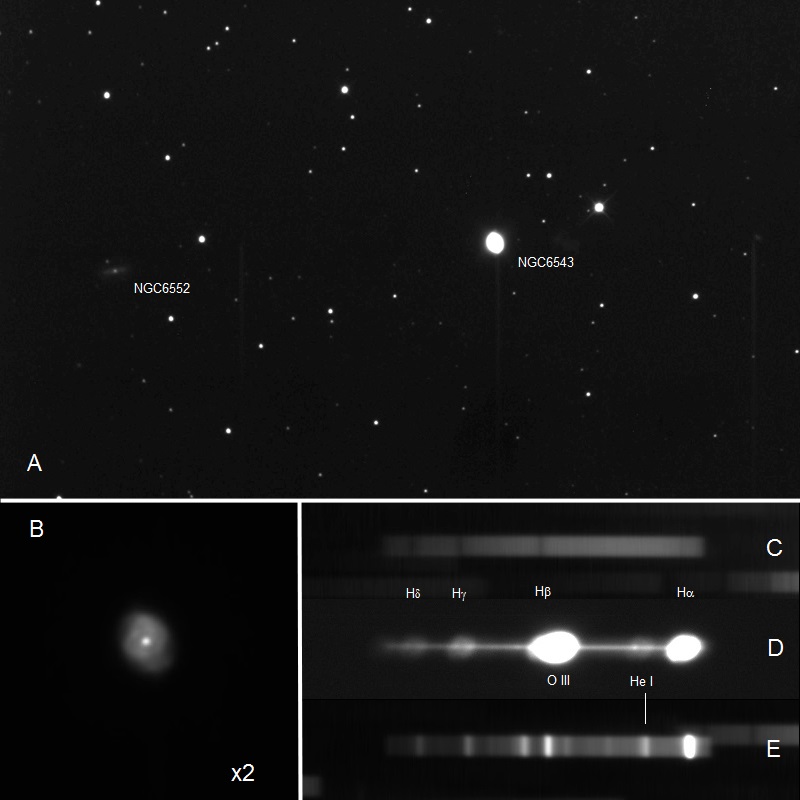 Some more recreational astronomy. After some success getting a spectrum of NGC2022 I thought I would try another planetary nebula.  NGC6543 is even smaller than NGC2022 but significantly brighter at ~mag 8.8.

In the composite image above A shows the rather sparse, 20 x 12 arc minute field containing NGC6543 and a small galaxy but little else.  The nebula is very over-exposed but image B at twice the original image scale shows some detail in the 22 x 18 arc second disc. (The central star is near mag 10.5).

The spectrum of the nebula, shown in D, is compared with that of an 'ordinary' star in C and nova Cas 2021 in E to help identify the elements giving rise to the monochromatic images of the planetary.

Images due to the hydrogen Balmer lines are clearly visible although H beta is overwhelmed by the very bright O III emission image.  An image that could be due to He I emission corresponds to the position seen in the nova Cas spectrum.

A spectrum of NGC6543 taken in 1864 gave the first clear proof that at least some nebulae are made of gas rather than just being an unresolved cluster of stars.

Note: OK, the image isn't up to Peter Goodhew's standard(!!!), but the spectrum does add an extra dimension to the observation... And I was pleased to see that the faint smudge of light in A above (just above the '543') does correspond to the denser part of the extended envelope of the planetary.

Jeremy Shears,  Grant Privett,  Robin Leadbeater,  David Basey,  Dean Ashton
Copyright of all images and other observations submitted to the BAA remains with the owner of the work. Reproduction of work by third parties is expressly forbidden without the consent of the copyright holder. By submitting images to this online gallery, you grant the BAA permission to reproduce them in any of our publications.