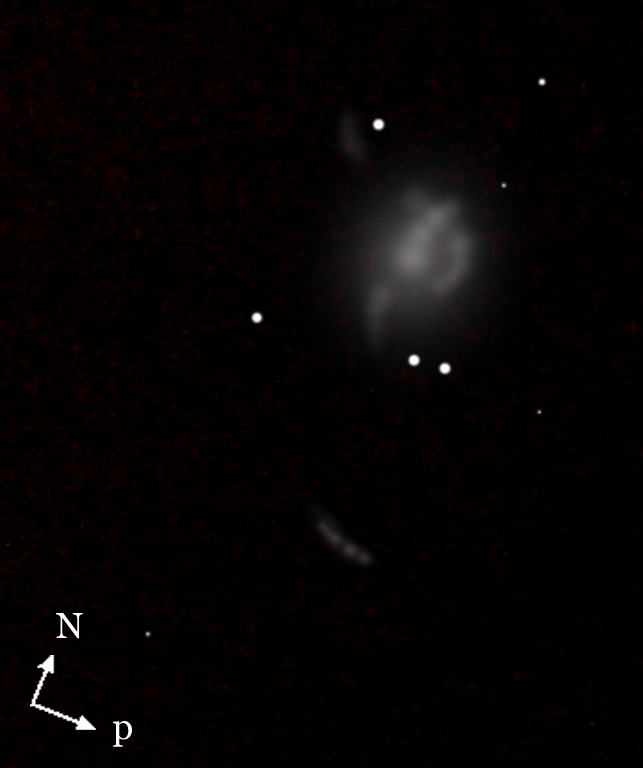 A correspondent in the 2017 April Journal, page 116, refers to how on rare occasions the seeing is exceptional. “Joyous. Anything seems possible on such a night” he writes. Such was March 20 although I didn’t fully appreciate it at the time. The night had not started well. The BBC were beaming images onto the White Cliffs using “three lighthouse-worth’s of power” to mark Vera Lynn’s 100th.  The light-spill was dire, but as the hour drew late they switched off and went home. Perhaps the tide was coming in.

A cold front had recently cleared through to the east. I turned the telescope to the pairing of Arps 214 & 322 in UMa.   I chose it because last year a friend had sent me his CCD image and I wanted to reciprocate with a drawing. The field was overhead, 10 degrees from the zenith.  Both Arps were seen easily with direct vision. In Arp 322 three components of the galaxy chain were seen without difficulty, namely Hickson 56B, 56C and 56D.  Components A and E were invisible.

Only when writing up the observation the following day did I appreciate that the three components in the galaxy chain are magnitudes 14.7, 15.8 and 16.8. My previous faint record was on Arp 331, spotting a galaxy of 15.7m and failing to see one 16.6m.

This is a really nice observation, Alan. I especially enjoyed reading your write-up about the circumstances surrounding it.