Observation by Richard McKim: A colour photo of Mars from 1986 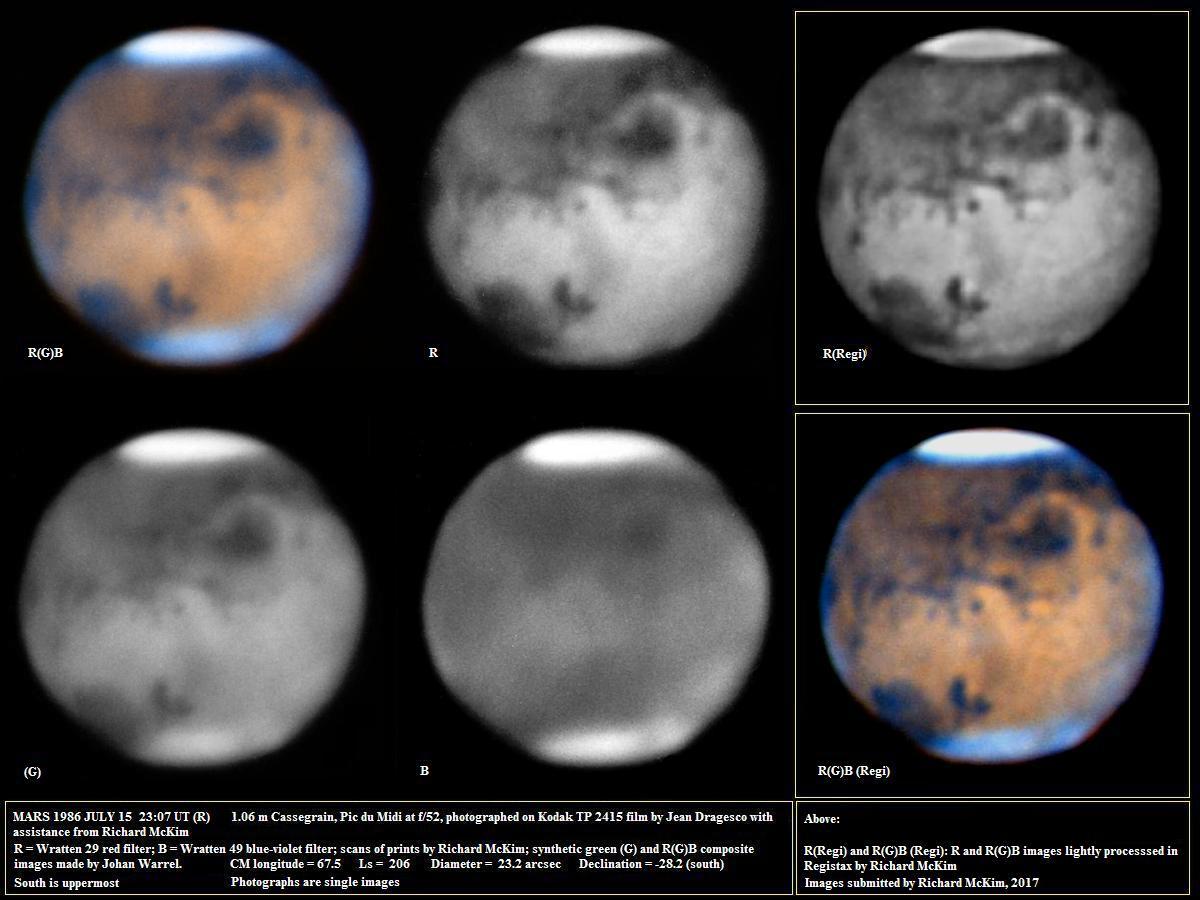 In 1986 I spent ten nights at the Pic du Midi Observatory because Mars was so low from the UK. In 2018 the planet will again be very low from here, but the season on the planet will be similar to that at opposition in 1986. At the time I accompanied Prof. Jean Dragesco to the Pic. He had worked there previously in 1975. We both took photos and I also made a large number of drawings of Jupiter, the Galilean moons, Saturn and Mars. The photos are all SINGLE exposures by Dragesco (with help from me to achieve the best focus) with a Nikon camera on the so-called 'miracle film' of Kodak, TP 2415. The synthetic green channel and the R(G)B composite image were made two decades later by Johan Warell, and the labelling and light Registax processing were done by me. That was our best night of the ten: Dragesco had at the time returned to his room to rest, and I stayed in the dome. Suddenly the seeing became perfect and I ran to fetch him... running is never a good idea at high altitude, but luckily the perfect seeing continued for a long time. Perhaps viewers will be amused by the results. Remember they are based upon SINGLE red and blue negatives. At the time, Dragesco was able to get a friend to enhance the image by using unsharp masking, and the result (not shown) is rather similar to the result secured with Registax here.

A very interesting comparison with today's images. I have Dragesco's book "High Resolution Astrophotography" (translated by a certain R J McKim) which is a fascinating snapshot of the state of the art in the late 80s when TP2415 and specialised long focus, small obstruction instruments were the norm. It came out in 1993 just as the CCD revolution was starting. The planetary images were pretty amazing at the time but they look very poor by modern standards. I wonder what they would look like if the negs were scanned and reprocessed with modern techniques?

Yes indeed Nick. Some treatment of at least one of Jean Dragesco's Saturn (1975) negatives was done at Meudon Observatory, though I did not see the final result. Of course that was done on another b&w film. The work I published was based on large prints which certainly brought out all the available detail in the negatives. At the same time I took some colourslides of Mars, which unfortunately I am not in a position to scan, but which look very grainy by comparison. The only way to get a hi-res colour image in 1986 was to make a tricolour composite on TP2415. We used W29 red and 49 blue-violet filters at the Pic as these were more dense than W25 red and W47 blue-violet ones and hence more suitable for getting the right image brightness with a large instrument. The question of developer was also an interesting one, and one could get quite different results depending upon what one used. The trip to the Pic was written up by Dragesco and myself in the BAA Journal vol 97 no 5 in 1987 and also in the French magazine Pulsar, No 658 in 1987. It was good to see that the 1st edition of Jean's book sold out, and a 2nd edition was issued in softcover. But if anyone wants to buy one, the illustrations in the first edition are much superior. In fact the book includes some of the very early CCD planetary work.