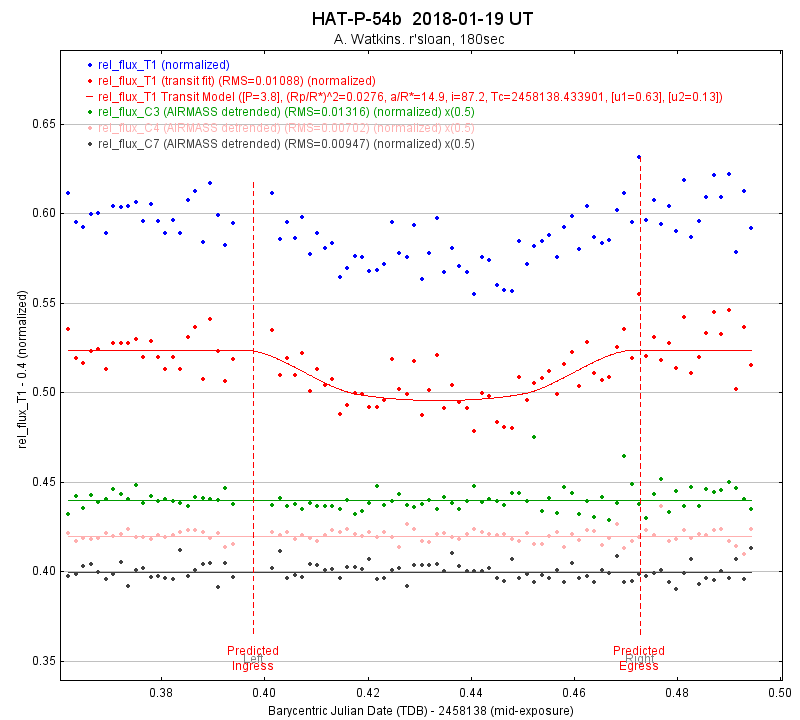 I have been wanting to successfully record an exoplanet transit for some time and have "spoilt" some attempts by simple errors; e.g. got the fov wrong, UT and civil time mixed up and transferring details to paper for use in the observatory wrongly.

AstroImageJ was used to process both the images and model the light curve. AstroImageJ is free and I can highly recommend a course, given by Denis Conti via the AAVSO, on its use.

Using and fixing both established values together with the predicted time of minima I obtained;

There would appear  to be a 2min difference between the observed and calculated minima.

That is a great set of data, congratulations on capturing the exoplanet transit.

The BAA is shortly to publish a tutorial written by Richard Lee on using AIJ in combination with the VSS Photometry spreadsheet. It is a great tool for photometry.

This is a great achievement.  At school, in the 70's, I knew of only 9 planets.  I didn't know then, any more planets would ever be discovered outside our solar system, even with the largest telescope in the world.  Marvelous work.  Would a Qhy5Lii cc and a GT81 be good enough to measure such transits, or would I need to use a bigger scope such as my 8.75" NR?

firstly apologies for not replying earlier, but I've only just become aware of your comments which I thank you for.  Also the BAA has just set up a new sub-section of the Asteroids and Remote planets section led by Roger Dymock.

I have sent you a private reply on your BAA account.