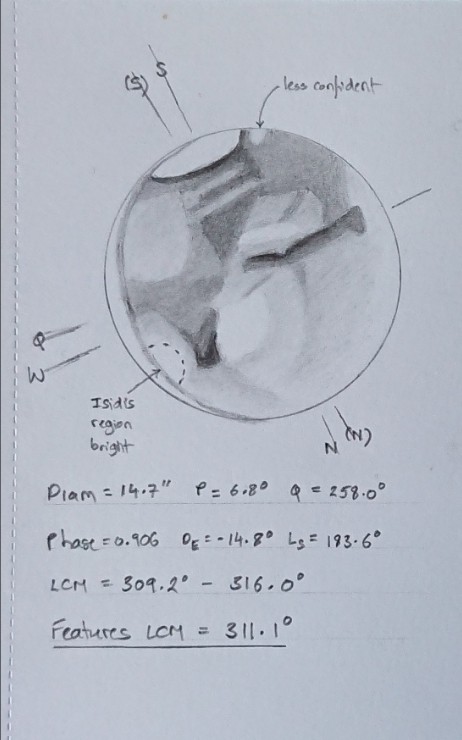 Observed 03:37 - 04:05 UT, features at 03:45UT, seeing III or better. A lot more detail could have been had given seeing but cloud terminated the session: great shame as I've mostly had poor seeing since April. A classic view of Mars with Syrtis Major draped down the western side of the planet, Sinus Sabaeus prominent and the SPC still substantial.

Syrtis most intense in a 'V' extending further up the east side to a nick. Southern edge of Sabaeus appeared more intense with a nick 1/3 of the way in from the west. More confident of subtle N. Hem markings around Syrtis, and lightest region immediately East of Syrtis. Appearance of lighter striations center disc SE of Hellas but detail of low confidence. Hellas obvious though not bright.

A bright diffuse region at terminator W of Syrtis (Isidis) and a lower confidence bright spot E of SPC. I noted no other bright spots on the limbs, which is a less common occurrence taken over the meridians observed since mid April (about all of them).

High confidence in a dark rim all the way round the SPC.

David Basey,  Jeremy Shears,  Mike Frost,  Andy Wilson,  Martin Lewis,  Peter Carson,  Chris Hooker
Copyright of all images and other observations submitted to the BAA remains with the owner of the work. Reproduction of work by third parties is expressly forbidden without the consent of the copyright holder. By submitting images to this online gallery, you grant the BAA permission to reproduce them in any of our publications.