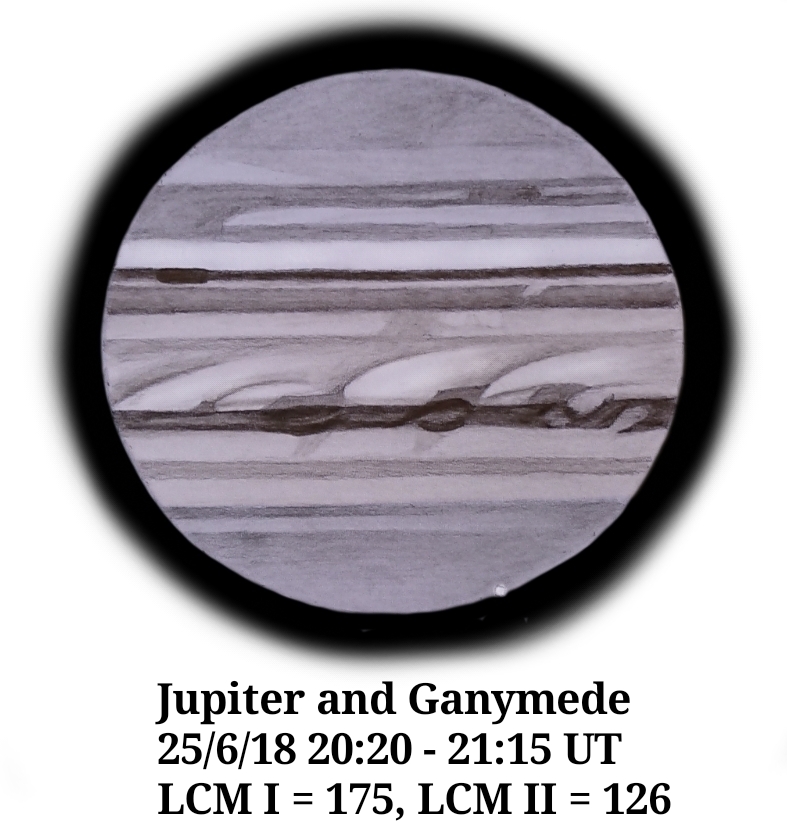 This is a product of an experiment with drawing a larger disc, 98mm equatorial diameter, as a pencil tip is often too large to depict the finer features well on my normal 49mm drawings. Colour, light highlights and black surround has been added with an image editing app on my phone.

Seeing conditions moderate and Jupiter spinning too fast for its own good as normal. Session was abandoned at 21:15 in any case under incessant attack from mosquitos! Nevertheless stayed long enough to see Ganymede begin transit over N polar region. LCMs are given for 20:30 UT.

Equatorial zone and Northern tropical and Temperate Zones yellowish again, equatorial belts a rich brown, some blue-green colouring to the poles and the STropZ the brightest zone on the planet.

Finer details of note: STZ appeared to be clogged to W, joining the STB and SSTB. SSTB in two components to E with a darkening of the zone between them in from the E limb. A less confident lightening in a wedge from the W limb above the SSTB and even more subtly in the SPR toward the E limb. A darkening on the SEBn near the W limb. A clear notch in the centre of the SEB to the E. NNTB dark and distinct to W but indistinct to E where I could barely tell it from the poleward region. A darkening in the N polar region just below the distinct part of the NNTB.

The EZ very busy with gorgeous festoons and a line below a lighter region just S of the equator. A darkening of this lighter region centre disc and with less confidence a couple of lighter spots to the E of this.

Jeremy Shears,  David Swan,  David Basey,  Maurice Collins,  Andy Wilson,  Martin Lewis
Copyright of all images and other observations submitted to the BAA remains with the owner of the work. Reproduction of work by third parties is expressly forbidden without the consent of the copyright holder. By submitting images to this online gallery, you grant the BAA permission to reproduce them in any of our publications.