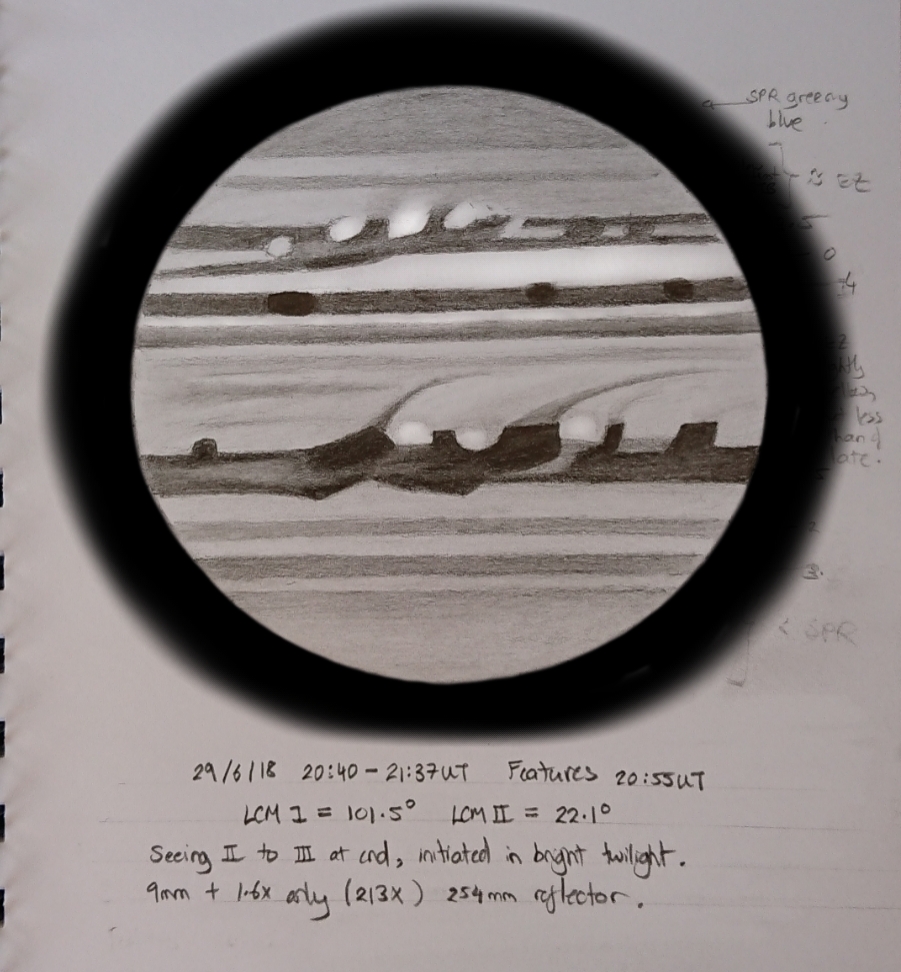 One of my presiding memories of this blazing June will be hunting down Jupiter in the final hour of daylight while the walls and patio still glow with the heat of the day. Great seeing conditions around sunset again (II), though they deteriorated by the end of the observation (III-IV). If only I could work faster this sketch would contain more details as there was a lot more to be had but I shall satisfy myself with recording the general story of this face of the planet in the middle of 2018.

Jupiter appeared near colourless tonight with the EZ showing just a touch of yellow and the Equitorial belts a touch of brown but I was quite surprised at the lack of it. The southern polar region was definitely a greeny blue though and probably the most obvious colouring I could see.

The most notable feature for me was the diagonal feature where the STB ran up to meet the SSTB which had a number of bright white spots on its southern edge, the most obvious of which wanted to spread out southwards. To the east of this the SSTB had a lighter zone with a couple of dark patches between n and s components. I didn't record any continuation of the STB East of the diagonal feature but I don't recall consciously checking for it either!

The SEB had a very dark s component supporting a few dark spots with a bright zone along its Northern edge, followed by a broader lighter SEBn component.

A dark band in the southern EZ seen along with the components of the SEB added to the very stripey look of this part of the planet. The EZ had some prominent festoons and was not very bright . I was not as struck by the brightness of the white plumes this time except for the cores on top of the NEB.

The NEB had some marked projections into the EZ and I did not get time to sort out the detail within the belt to my satisfaction. I think I probably failed to record one or two markings hanging from the NEB down to the NTB.

I could distinguish a NTB, NNTB and a zone below this. The NPR was less intense than the SPR.

I believe I did a better job of representing the widths of the belts and zones with this sketch than on the 25/6/18. Again, I've later added the black of space and some bright highlights digitally.

Jeremy Shears,  David Basey,  Martin Lewis,  Andy Wilson
Copyright of all images and other observations submitted to the BAA remains with the owner of the work. Reproduction of work by third parties is expressly forbidden without the consent of the copyright holder. By submitting images to this online gallery, you grant the BAA permission to reproduce them in any of our publications.