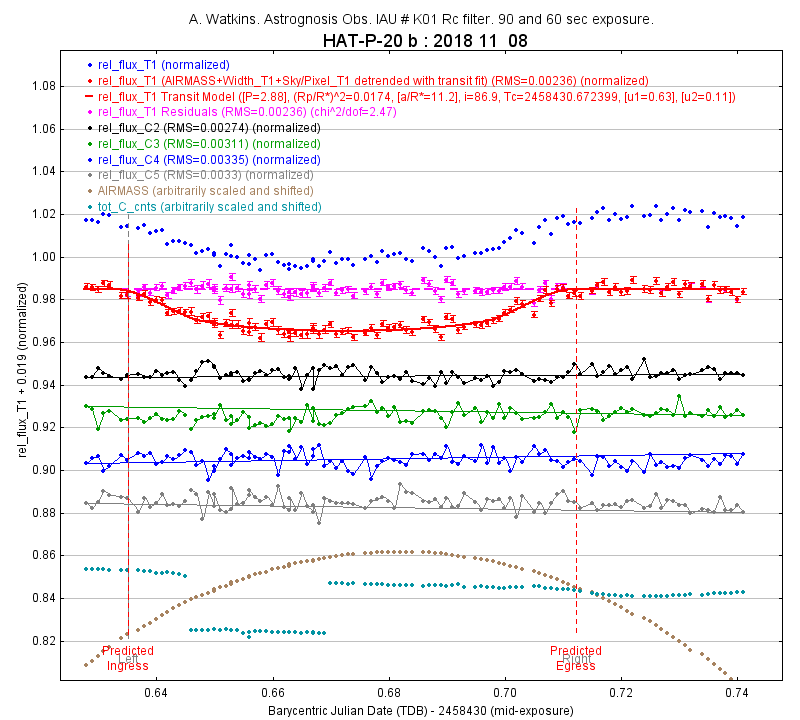 HAT-P-20 b is a Jupiter sized planet orbiting a host star of Mag v 11.3.  This is a result I'm pleased with considering the night was not particularly clear with seeing of fwhm 3" at best. Also,  problems I had had with the mount and auto guider were resolved enabling  me  to keep the target star centred  on the same 2-3 pixels for nearly 4 hours. A requirement for some of the Pro/Am projects I have become involved with.

AstroImagJ was used for the for the photometry and transit modelling for which the only variables fixed were a/R at 11.23. and the u1 and u2 limb darkening coefficients.

With regard to any Transit Time Variations (TTV) the transit minima was 2m:27s  early, which is in keeping with similar values on the EDT site and does not support any TTV changes. Note also that changing parameters only altered this value by ~1minute either way.

The drop in the total  C count resulting in exposure changes from 90-60-90 sec..

David Basey,  Denis Buczynski,  Andy Wilson,  David Swan,  Peter Mulligan,  Richard Miles,  Graham Winstanley,  Peter Carson,  Shaun Taylor,  Robert Ian Henderson,  Dave Smith,  Jeremy Shears,  Manolo_Rodriguez
Copyright of all images and other observations submitted to the BAA remains with the owner of the work. Reproduction of work by third parties is expressly forbidden without the consent of the copyright holder. By submitting images to this online gallery, you grant the BAA permission to reproduce them in any of our publications.