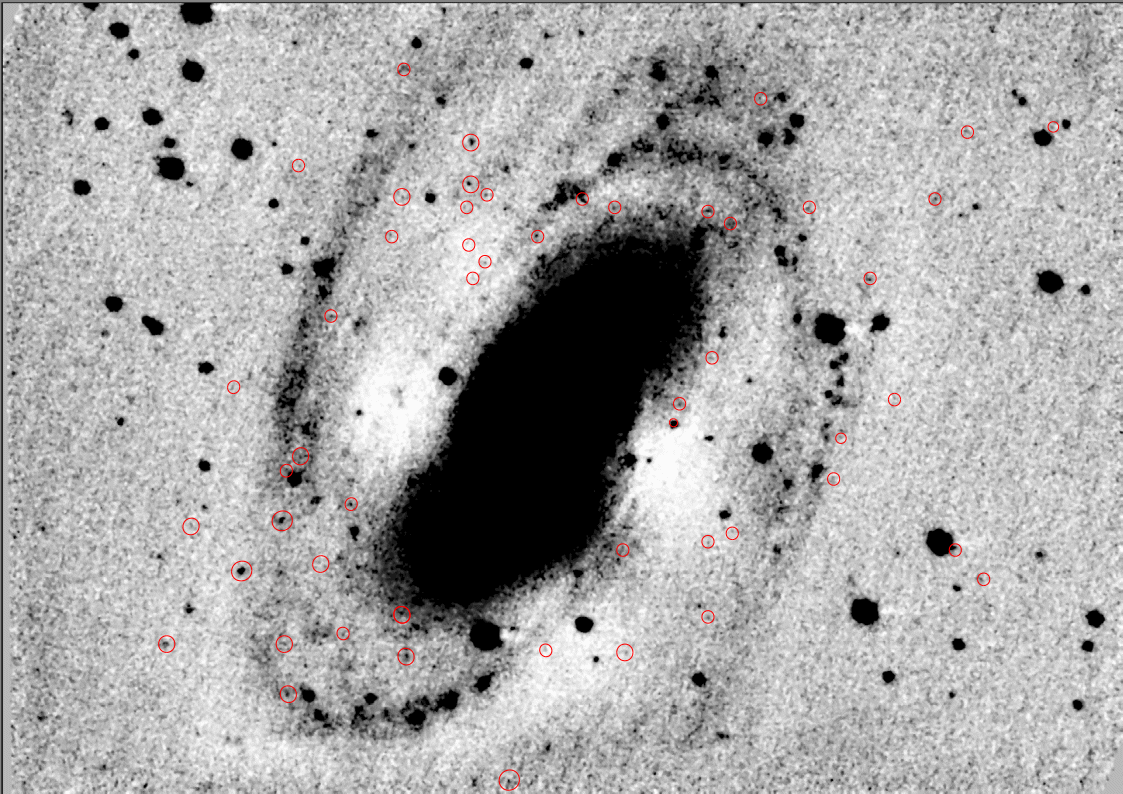 Producing this image of extragalactic globular clusters took perhaps 24 hours of work in total.  Collecting the photons was the easy part, just a matter of pointing the telescope at M81 and leaving it to take a few hundred unfiltered 30-second subs.  Each sub was then examined in turn with the ds9 FITS image viewer and those which showed trailed star images were rejected.  A local installation of astrometry.net took perhaps an hour to plate-solve the 239 survivors; SWarp then produced a median-added image.

Finding a catalogue of the positions of M81's globular clusters was an interesting exercise in the use of the DuckDuckGo search engine.  It eventually turned up "Spectroscopy of M81 Globular Clusters" published in 2010 by Julie B. Nantais and John P. Huchra and which is available as https://arxiv.org/pdf/0912.2119v4.pdf. Three pages of positional data were printed for subsequent use.

All the globular clusters in M81 are rather faint so extreme contrast stretching of the co-added image was needed.  Initial processing employed ds9.  The inner regions of the galaxy had to be sacrificed in order to gain usable views of the outer regions.  Like in our own galaxy, M81's family of globular clusters are generally far away from the galactic core.  The final FITS image was noisy but of high enough contrast.  The GIMP was then used to smooth the image and to tweak the contrast a little more.  The GIMP is a fine image processor but difficult to use as a drawing package so the final image was exported in PNG format.

LibreOffice's Draw program is a fine image annotation program and so it was used to place red circles around identified globulars. Identifying them was the lengthiest part of the entire process.  The printed list was examined line by line and each position typed into the Aladin Lite viewer (http://aladin.u-strasbg.fr/AladinLite/) displaying images from DSS2.  The Simbad catalogue overlay was used to mark and identify each object.  Much zooming in and out, panning and cross-checking between the Aladin, final FITS image and the PNG version took place before a circle could be drawn in the correct place.  Not all clusters could be marked.  Some were outside the imaged area, some lost in the brighter portions of the galaxy, and a few were blended with bright stars or HII regions, One example in the final category could be marked as it shows up as a blip on the edge of a star image.  (This one reminded me of the 1978 discovery image of Charon but I digress.)

Only tentative identifications could be made of some globulars, generally the faintest ones.  Some of fainter marked "objects" may be areas of unusually high noise.  The magnitudes given by Simbad correlates well with visibility but not perfectly.  The background glow from the galaxy reduces contrast of the fainter objects.  On the other hand, a few globulars "borrowed" intensity from fainter neighbouring objects and were relatively easier to pick up. Altogether 49 of the 107 catalogued GCs were marked.  Their V magnitudes range from 17.53 to 20.90.  I'm certain that the limiting magnitude would be below 21.5 if it wasn't for the galactic background.

Perhaps this exercise has little scientific importance but I'm now much more familiar with the appearance of M81.  I also have the unprocessed deep image of the galaxy which may well turn out useful should I go looking for transient objects in M81 in future.

A novel project conducted with a high degree of expertise.  In my view should have been a picture of the week!