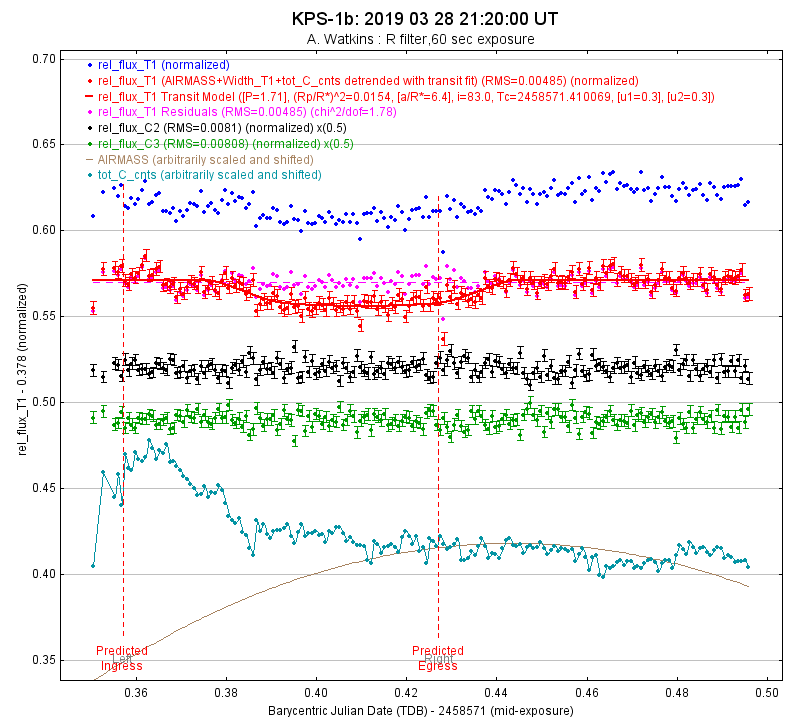 Going against the grain of a recent post KPS-1b was the first exoplanet discovered in 2016 by Paul Benni, a  US  amateur astronomer,  using an  0.279m Rowe-Akermann  Schmidt astrograph as part of the Kourovka Planet Search Project (KPS). The discovery paper was bought to my attention in a forum post reply, by Robin Leadbetter. As a result I have been able to image this object using an ephemeris on ETD

Initial analysis using AIJ of my data shows  mid-transit to be some 26.5 mins later than predicted. Current mid-transit times appear to based upon discovery observations   frpm 2016 by the KPS team for which the propagated error of  mid-point  time at observation was 54min (NASA-EX-Ach). The duration of the transit, 101.1 min, was some 33sec longer than expected.

I have submitted my data to ETD for the first time - however, their online protocol and modelling method produces slightly different results. A shorter transit duration of 90 mins and a mid transit time difference of 28min 29sec longer. These results are consistent with three submissions by four other observers of the same transit also on ETD.

Seeing at the time was fair and steady with some haze at the start. Auto guiding was out of action and some drifting over time occurred.  Ideally, a greater lead in time was needed and indeed was  planned for, but, " the best made plans of mice and men"

All in all a very pleasing result.

David Basey,  Jeremy Shears,  Mr Andrew Jonathan Wilson,  Peter Mulligan,  john simpson,  Peter Carson,  Andrew Dumbleton,  Dave Smith
Copyright of all images and other observations submitted to the BAA remains with the owner of the work. Reproduction of work by third parties is expressly forbidden without the consent of the copyright holder. By submitting images to this online gallery, you grant the BAA permission to reproduce them in any of our publications.