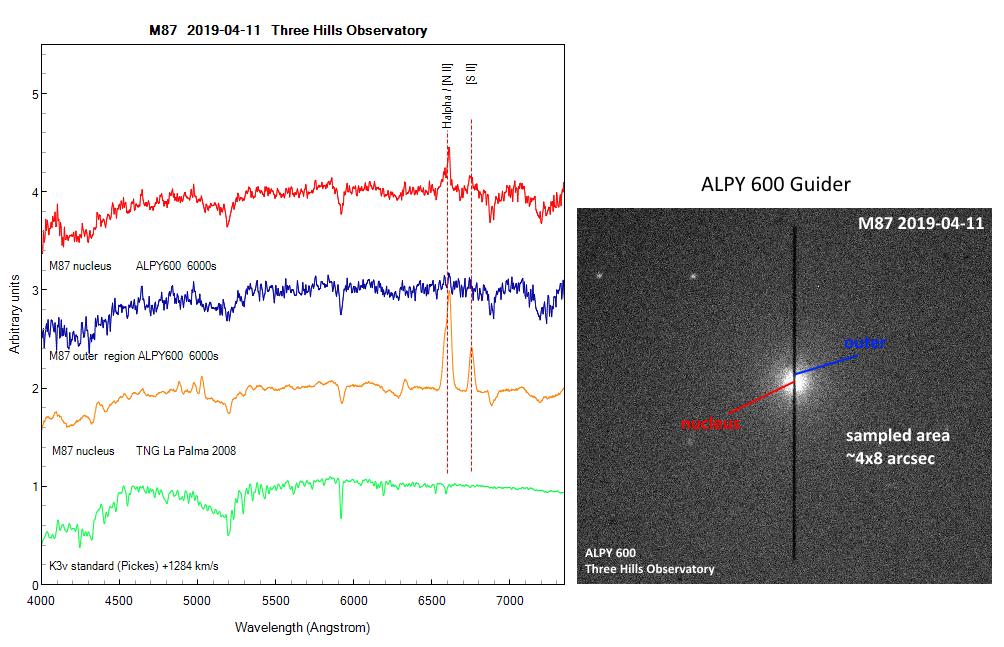 Since M87 has been in the news recently with the radio image of the region immediately surrounding the black hole,

I thought I would take a spectrum of this region using the ALPY600.  I obviously could not get anywhere near as close in as  the radio image but the spectrum of the nucleus (red) shows clear emission lines of H alpha, [N II], [S II]  from the material in the region surrounding the black hole, redshifted by  ~1300km/s . Note the absence of these emission lines in the spectrum covering a region further out (blue). I have also included a spectrum of this region from the literature taken by the 3.6m TNG telescope in 2008 (orange) which covers the central 2x2 arc sec region from this reference

Also for comparison is a K3v stellar reference spectrum,shifted to match the M87 redshift. Note the similarity with the combined starlight from this mature elliptical galaxy.

Peter Mulligan,  John Coffin,  Miguel Araújo,  Ray Emery,  Hugh Allen,  Andy Wilson,  Andrew Smith,  Len Entwisle,  Graham Winstanley,  David Basey,  Nick James,  Steve Knight,  Andrew Dumbleton,  Paul Leyland,  Jeremy Shears,  Peter Carson
Copyright of all images and other observations submitted to the BAA remains with the owner of the work. Reproduction of work by third parties is expressly forbidden without the consent of the copyright holder. By submitting images to this online gallery, you grant the BAA permission to reproduce them in any of our publications.