Observation by Derek Robson: Spectrum of Vega and Iridium flare

Spectrum of Vega and Iridium flare 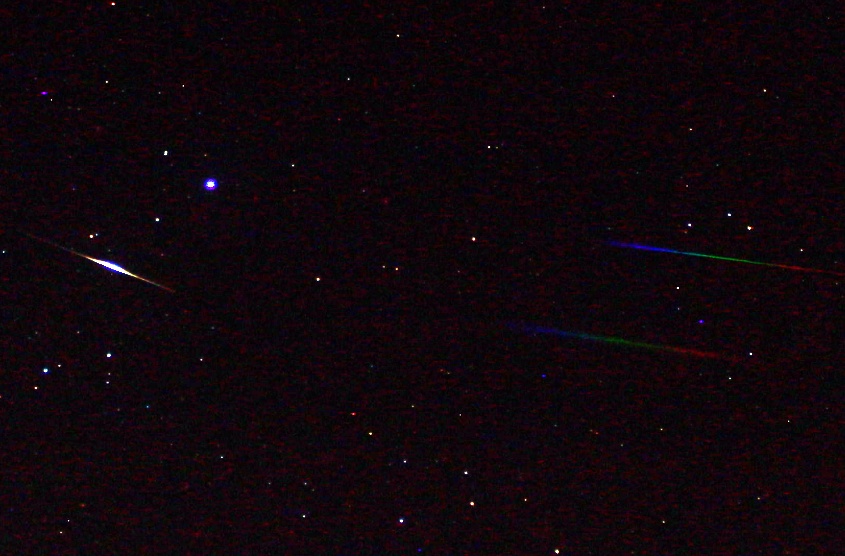 I was taking batches of images of the spectrum of Vega for calibration stacking and continued testing of plastic diffraction grating of 500 lines/mm.  This frame happened to catch an Iridium satellite flare and it's spectrum.  I thought it was useful to have Vega as calibration star in the same field (spectrum almost) as the satellite.  This image is a single image, but there are a few images of Vega that could be used to stack.  The processing needs to be redone - this was an autocolour click in Irfanview, which I think made it too contrasty and perhaps at this focal length, there may be nothing useful to use as visible calibration markers from the spectrum of Vega.  The red end is clipped as well. Dark lines are present.

In some other observations with the same (home made) grating, there have been examples of spectra of bright terrestrial objects such as lights, where many dark lines superimposed over the continuum spectrum, are equally spaced (i.e. unlike the separation distances of pairs of lines in a series of absorption lines in the hydrogen atom).  I wondered if this might be interference perhaps caused by variable separation distance of the grating plane to the camera lens outer surface.

The home made grating is mounted in a hard cardboard frame, slotted into the innermost slot (of 3 slots) in a Cokin style filter holder, the latter screwed to an adapter ring screwed into the filter thread of the lens. Separation distance can thus vary depending on grating placement. I have not yet tested different grating - lens separation to see if it makes any difference.  In this spectrum, the dark lines appear to vary in gap, so could they be genuine absorption bands?

Graham Winstanley,  David Basey,  Andy Wilson,  Andrew Dumbleton,  Peter Carson,  Jeremy Shears
Copyright of all images and other observations submitted to the BAA remains with the owner of the work. Reproduction of work by third parties is expressly forbidden without the consent of the copyright holder. By submitting images to this online gallery, you grant the BAA permission to reproduce them in any of our publications.