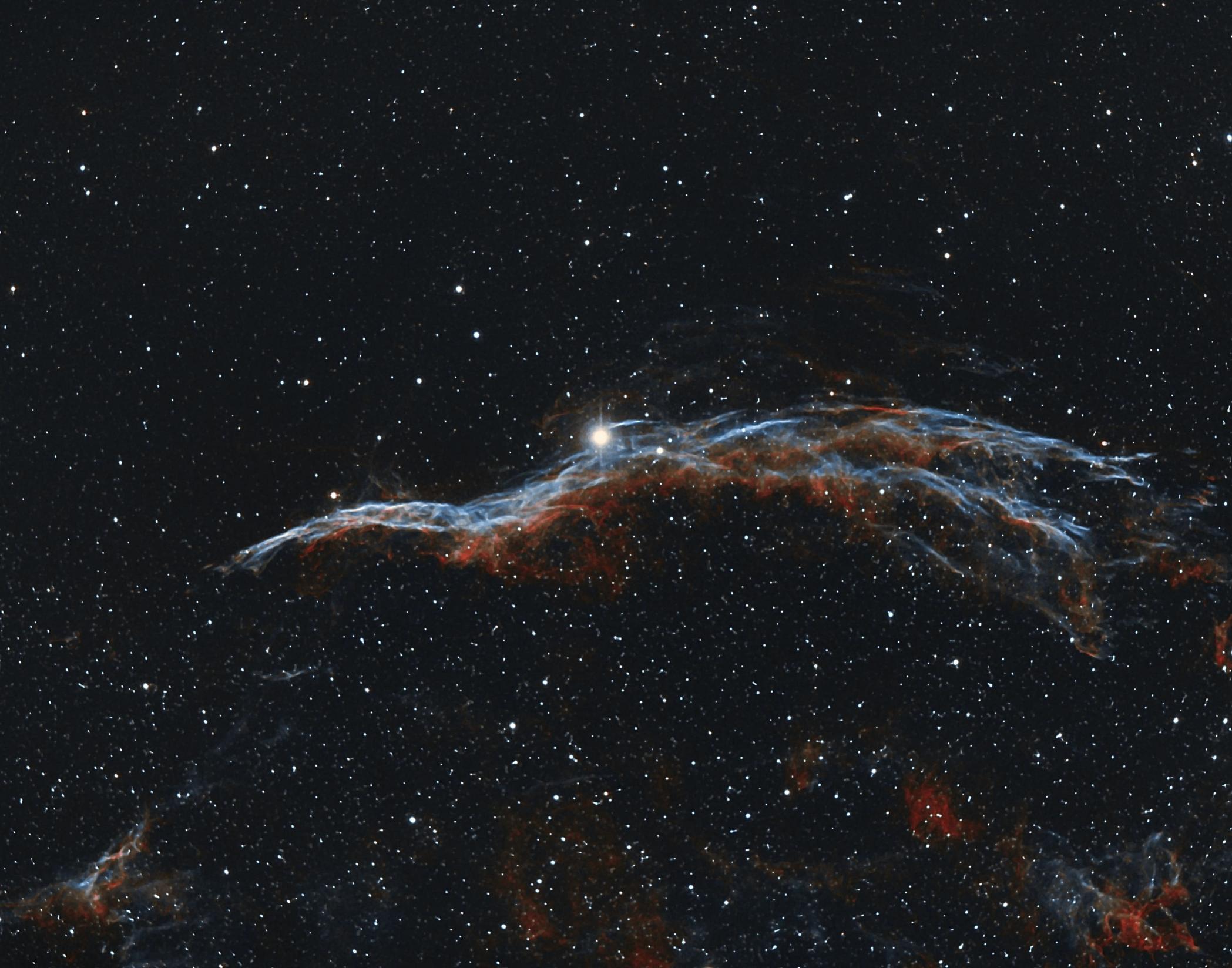 The Western Veil also known as The Witches Broomstick and Finger of God is part of a larger structure representing a star which went supernova c8,000 years ago. NGC 6960 is part of the supernova remnant, the remaining parts being the Eastern Veil, NGC 6992 and Pickerings Triangle.

Located in the constellation of Cygnus, this represents for me one of my favourite objects you can image in the night sky (well visible from my garden anyway!).

I have previously imaged NGC 7000 in H-alpha and that was a prelude to going deeper on NGC 6960 using the HOO palette. The red channel is represented by H-alpha and the Blue and Green channels by Oiii. This being my first foray into narrowband palettes, it presented a number of challenges some of which I have not really overcome.

First there was a large number of pinpoint red stars which had to be removed. Second, NGC 6960 sits firmly in the glow of the Milky Way and so to really appreciate the object it was also necessary to remove/reduce a large number of stars (with some artefacts visible). Finally, it was a question of getting the colour balance where I wanted it. I favour more subtle hues and hopefully this is reflected here.

The imaging was undertaken on the night of the 23/24 August 2019 commencing at 21:51.The Hydrogen/Red channel was made up of 19 sub frames @ 240s; the Oxygen/Green & Blue channels were made up of 20 subframes at 240s. Overall 2 hours and 36 minutes of exposure time. I also took a similar number of Sulphur and Luminance images but have not used them here.

I followed up again across the nights of 24/25 and 25/26 August with what I hope is a much better framed version of this target and hope to follow up with this second version in the coming days.

Thank you for looking in.

Neil Morrison,  Andy Wilson,  Jeremy Shears,  Mike Frost,  Graham Winstanley,  David Basey,  Peter Mulligan,  Dr James Dawson,  Andrew Dumbleton
Copyright of all images and other observations submitted to the BAA remains with the owner of the work. Reproduction of work by third parties is expressly forbidden without the consent of the copyright holder. By submitting images to this online gallery, you grant the BAA permission to reproduce them in any of our publications.