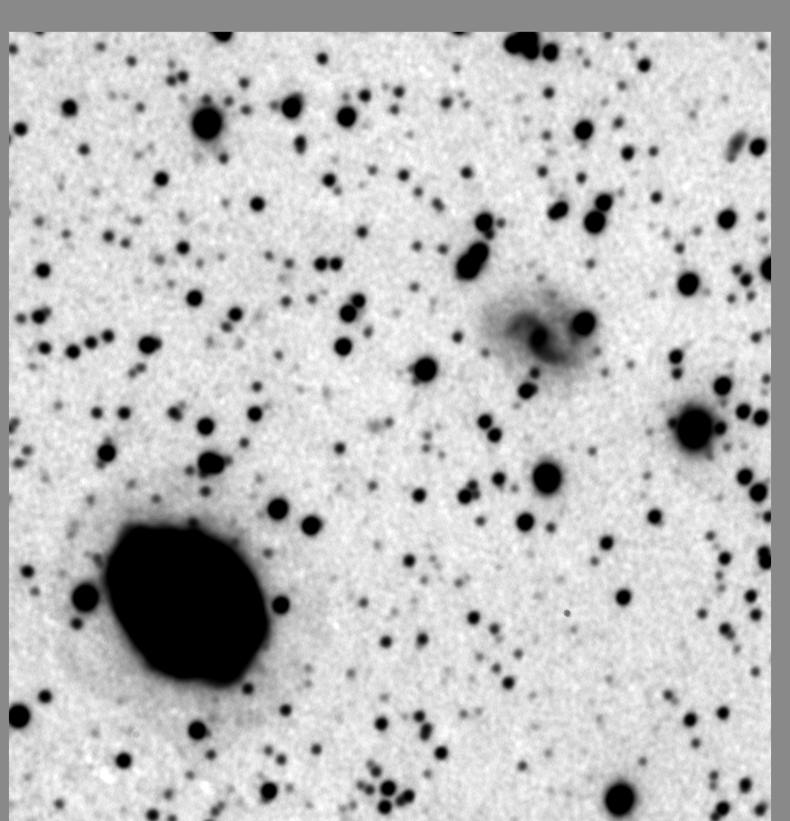 This shows a portion of the first moderately successful image taken with the new camera, which is still in the commissioning phase.  In particular, the autoguider doesn't (yet) but the mount seems to give adequately round stars on a 30-second exposure.

The scope was centred on IC 1296, a 15th-magnitude barred spiral galaxy.  Its nucleus is a little over-exposed so as to bring out the details in the spiral arms, including a few H-II regions and a star-forming region.

At top-right is a nearly edge-on spiral galaxy of about 16-17th magnitude.  Its nucleus shows up nicely but the stellar-looking object towards the edge of the disk is indeed a  foreground star.

At bottom left is a view of the Ring Nebula which one doesn't often see.  The ring is invisible as it is very over-exposed because of its extreme brightness.  What is visible is the much fainter outer shell of fluorescing gas.

Limiting stellar magnitude is around Gaia-g 20.5

After I'd posted the image, SWMBO noticed a star which is on the full frame but not, as far as we can tell, on the DSS2 counterpart.  It's beyond the top-right of the image above.

All being well I'll take some more images tonight and see whether it is still there.  If not, it may be a flare from a red dwarf.  If it is, it may be some sort of CV.

The suspected transient is no more, it has ceased to be.

I thank all those who responded to the TA E-circular E3445 with images showing nothing at the reported position.  My images from last night and two nights previously still show it but I'm now convinced that it is some kind of imaging artifact, though its cause is puzzling.  The best I can come up with is that it's a ghost from some distant bright star, perhaps beta or gamma Lyrae.

Oh well, at least I didn't announce the re-discovery of Mars.