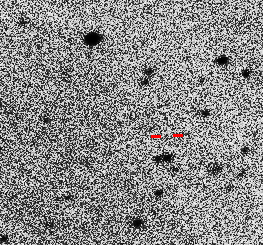 Caliban is an irregular outer satellite of Uranus discovered with the Hale 5m at Palomar in 1997 and is estimated to be 72km in diameter.  At a MPC-ephemeris V magnitude of 22.2 it is likely the faintest I can manage in my program to image satellites in the outer solar system. Even with three hours exposure, unfiltered for maximum sensitivity, the signal to noise ratio is barely 3. The image above has used truncated histogram equalization to maximize the contrast.  Stacking was made markedly easier because the satellite is near a stationary point as observed from the earth, moving less than two arcseconds during the 3-hour exposure.

The only reasons why I am certain of the identification are that it lies exactly at the predicted position and there is no other object of comparable brightness at that position in any images taken to that limiting magnitude which I have been able to find.

David Swan,  David Basey,  Mike Foulkes,  Andy Wilson,  Peter Carson,  Derek Robson,  Andrew Dumbleton
Copyright of all images and other observations submitted to the BAA remains with the owner of the work. Reproduction of work by third parties is expressly forbidden without the consent of the copyright holder. By submitting images to this online gallery, you grant the BAA permission to reproduce them in any of our publications.