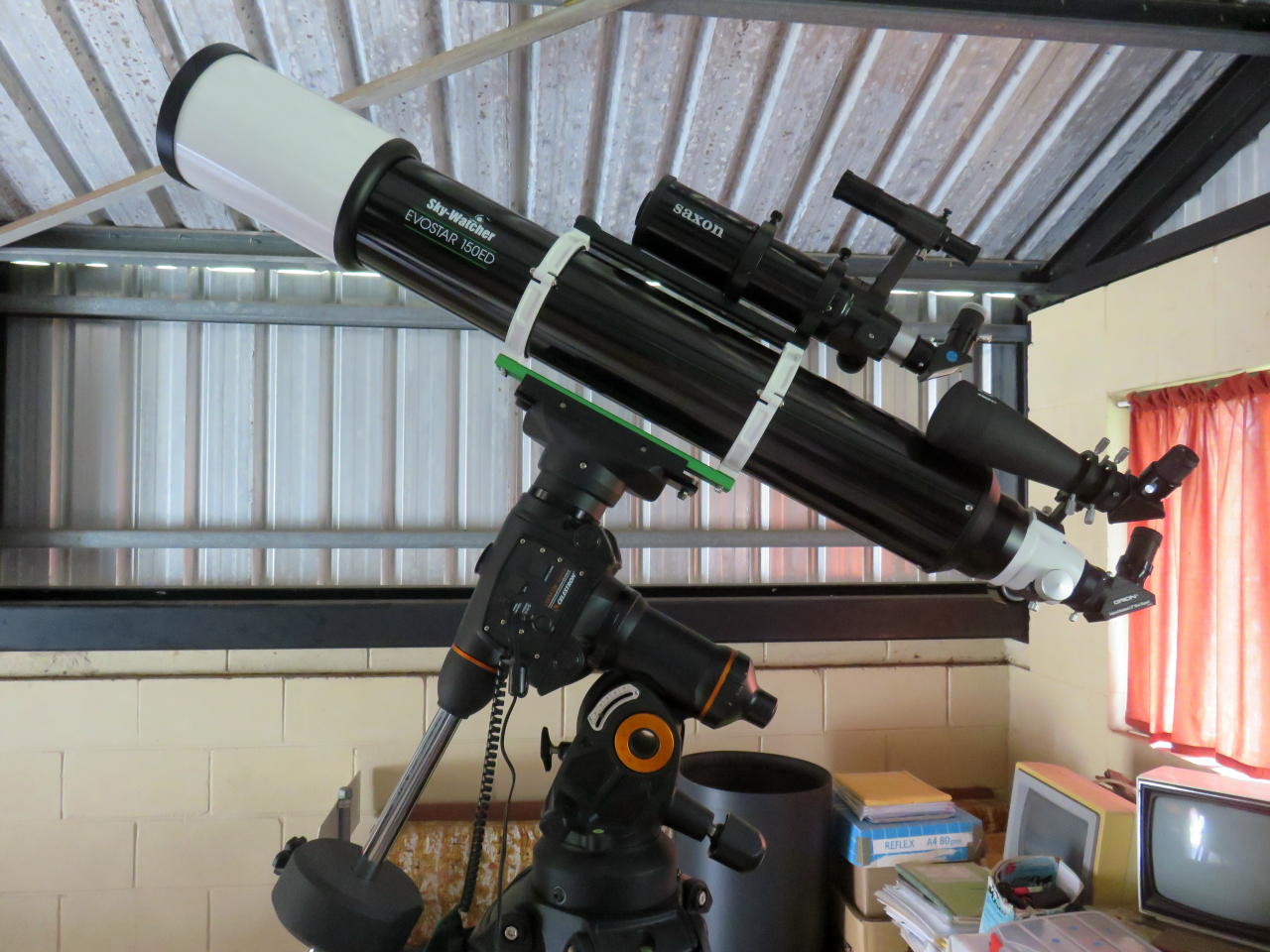 This instrument replaces a ‘Celestron’ standard achromatic refractor of the same dimensions. It arrived in a large cardboard box. The next layer within is a foam plastic box, and the third layer of this sarcophagus, (shades of ancient Egypt), is the aluminium packing case in which lies the telescope.

The whole setup weighs 31.2kg, but the instrument itself only weighs in at 9.9kg or less than one third the total weight.  Further the box is 37cm high X149.5 cm long (cardboard outer) and 29cm high X 143cm long (aluminium) with the widths 47cm and 41.5cm respectively. Thus it has been carefully designed to be unable to fit under a bed as well of being of dimensions that are very difficult to repurpose – or even to store comfortably.  For those who need to transport the instrument, this aluminium box is great, but it is awkward and weighty.  Otherwise in my view, it is a waste of resources.  (The much costlier three element model comes in a box with 75mm end wheels and one person could more easily move it around.)  Maybe the author of the once popular book “101 uses for a dead cat” could offer some suggestions for alternate use of the box. Anyway, mine got manhandled into storage out in our back shed where it will remain gathering dust and gecko poo.

‘Skywatcher’ (and ‘Saxon’), just like the ‘Celestron’ unit, are made by the Synta company so the accessories - 80mm F5 guide, rings, and mounting bar, simply swapped over with no fuss. Similarly mounting the scope presented no problem.

The ‘Celestron’ tube with finder scope, diagonal and eyepiece is stated to weigh 8.6kg. I weighed the ‘Skywatcher’ ED at 9.9kg and it arrives with neither finder, nor 2” to 1.25” adaptor, diagonal and eyepiece, only a couple of Canon SLR camera fittings. Therefore adding the accessory weight, the ‘Skywatcher’ must be around 2kg heavier.  How is this possible?   - The top cap is a very solid quality unit, not the usual plastic/tin and this perhaps indicates something in the construction.  Also, the tube, though of very similar length, is 180mm in diameter rather than 171mm and the lenshood is even more than proportionally larger in diameter.

The two speed focusser works very smoothly and initial testing at high magnification showed excellent star discs and diffraction rings, given the poor conditions. Tested on Canopus, there was a small amount of colour discernable out of focus, and slight blue scattering on the peripheries of the focussed image, but it was very subtle. (If you want a perfect image, I suggest buying a triplet.) Compared to an achromat, the focussed image on such a bright star was effectively colourless.  At first examination (at X450) the disc and rings appeared smaller and ‘cleaner’, but obviously this could very well be subjective.  Another matter noticed upon first examination was that there were no aperture stops reducing the unobstructed view of the objective to a small circle at the centre of the field of vision.

I will continue testing and propose to produce a detailed article, with images, comparing the performance of the previous achromat with the ED model.

David Swan,  Ray Emery,  David Basey,  Alan Thomas,  Graham Winstanley,  Chris Dole,  Jeremy Shears,  Andy Wilson,  Andrew Dumbleton
Copyright of all images and other observations submitted to the BAA remains with the owner of the work. Reproduction of work by third parties is expressly forbidden without the consent of the copyright holder. By submitting images to this online gallery, you grant the BAA permission to reproduce them in any of our publications.