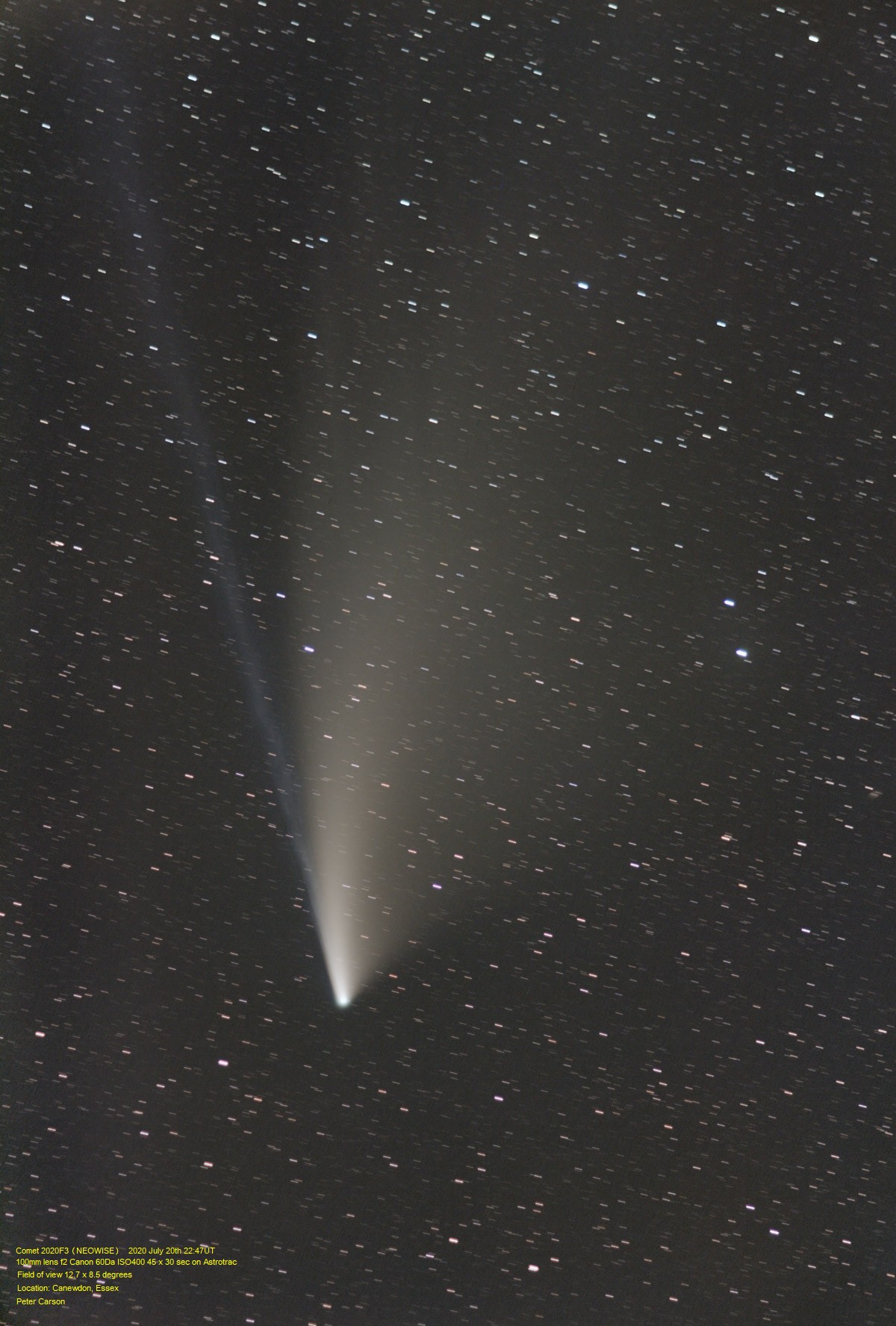 I went to my usual observing site in Canewdon. The comet was visible to the naked eye from dark until I left around  at around half past midnight. In binoculars the tail could be seen stretching up as far as Merak, one of the pointer stars in the Plough. Still a lovely sight despite it being not as bright as previous nights. My image is with a 100mm lens and I combined 45 x 30 second exposures to record the broad fan shaped tail.

I had company during my stay. Shortly after I arrived a couple of woman made their way across to the middle of the field where I was set up and asked if I was from the astronomy club in Hadleigh and was I looking at the comet....they were correct but how did they know all that? They stayed for  around 90 minutes until after midnight and we did a tour of the sky and saw two passes of the ISS which seemed to keep them entertained. Shortly after they went four youths made their way across the field, two boys and two girls, who had I think been parked in cars outside the Church doing what youngsters do in cars in the dark! They wanted to know what I was photographing. After I said it was a comet and those bright “stars” in the South where in fact planets they also wanted  a guided tour of the sky. All of them could see the comet without me providing too many directions and were fascinated. They stayed for about 30 minutes then proceeded to walk off further into the field, why I’m not sure.

So six complete strangers managed to find me in the middle of a dark corn field in rural Essex, not to mug me but for me to help them enjoy the night sky....that has got to be one of my more odd nights!

Callum Potter,  Ray Emery,  Nik Szymanek,  Chris Dole,  Ron arbour,  Jeremy Shears,  Andres Chapman,  Grant Privett,  Graham Winstanley,  David Basey,  Nick Hewitt,  Callum Scott Wingrove
Copyright of all images and other observations submitted to the BAA remains with the owner of the work. Reproduction of work by third parties is expressly forbidden without the consent of the copyright holder. By submitting images to this online gallery, you grant the BAA permission to reproduce them in any of our publications.