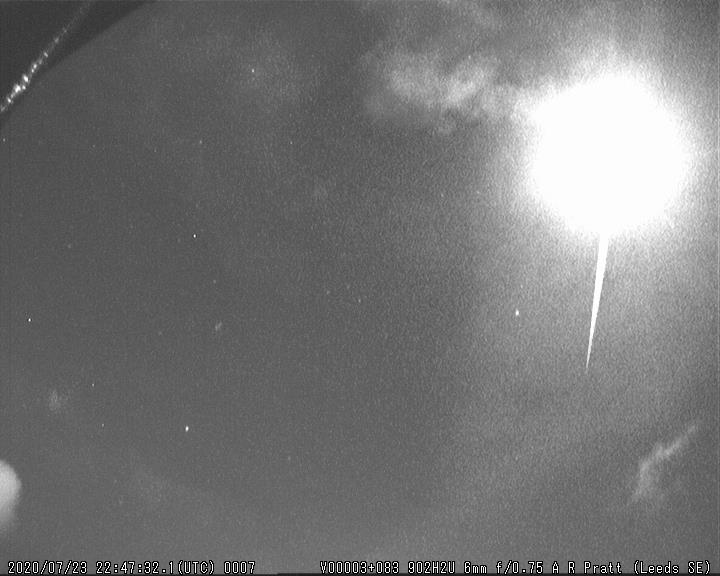 A number of fireballs have been seen over the UK in recent weeks. This one, captured on my Leeds_SE camera, was an alpha Capricornid which trundled up from the radiant, steadily increased in brightness as it passed near Altair, produced a series of flares, culminating in a bright flash of around mag -6 to -8, then continued as a less bright component as it faded. The video can be viewed here

(I will add a ground track and orbit after including data from other video observers).

The alpha Capricornids (CAP) produce low rates during July into early August, displaying relatively slow meteors (geocentric velocity 22 km/s) some of which are impressive fireballs. Their parent body has been identified as asteroid 2002 EX12 / comet 169P/NEAT and its fragmentation is producing an evolving meteor shower worthy of study.

There's plenty of meteor activity at the moment as we build up to the Perseids' maximum on August 11/12.

David Basey,  Len Entwisle,  Neil Morrison,  Jeremy Shears,  Andy Wilson,  Dean Norris,  Peter Carson
Copyright of all images and other observations submitted to the BAA remains with the owner of the work. Reproduction of work by third parties is expressly forbidden without the consent of the copyright holder. By submitting images to this online gallery, you grant the BAA permission to reproduce them in any of our publications.