Observation by Robin Leadbeater: A Perseus field packed with astrophysics

A Perseus field packed with astrophysics 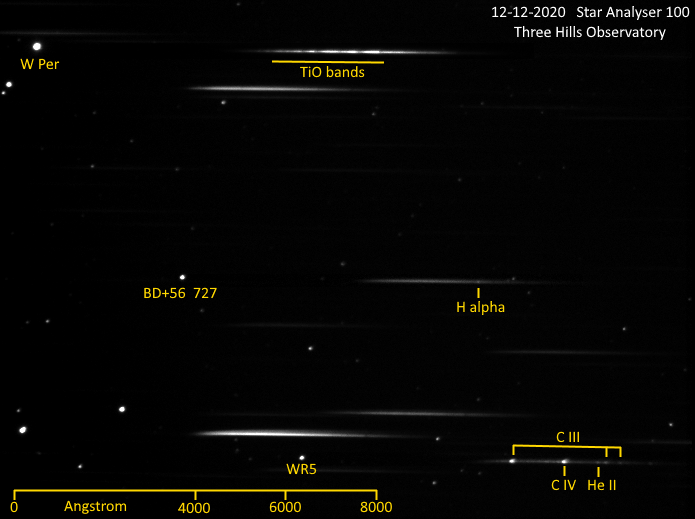 A conventional astrophotograph of this star field in Perseus (~20x15 arcmin) would look rather ordinary but a diffraction grating (100 lines/mm Star Analyser) placed in front of the camera to spread some of the star light into spectra reveals some interesting astrophysics going on in these stars thanks to the power of spectroscopy. (34x10 sec, Celestron CII, ATIK 314L. Note a non linear brightness stretch has been applied to avoid saturation of W Per so the image should not be used for quantitative flux measurements)

Top of the frame is W Per,  a Red Supergiant star and like most other supergiants (Betelgeuse for example) is variable in brightness. Here it is currently magnitude 9.5 measured at visual wavelengths (from the AAVSO database), but much brighter in the Infra-Red where most of the light from this star is produced. (The spectrum here extends out to wavelengths beyond 1 micron, the limit of the CCD sensor sensitivity.) We can tell it is a cool star (spectral type M5i) from the sawtooth shape absorption bands in the spectrum produced by spinning and vibrating molecules of Titanium Oxide which are able to form in the relatively cool (~3000K) atmosphere of this star.

Centre is BD+56  727, a hot star (effective temperature ~15000K) of spectral type B5 with no obvious strong absorption lines in the spectrum, typical of very hot stars. The star should look very blue with the spectrum much brighter at the shorter wavelengths but in this case the spectrum is almost even brightness across the visible range due to the large amount of interstellar dust between us and the star which dims and reddens its appearance. (It is V magnitude 10.6 but the dust absorbs over 90% of the visible light so would look much brighter and bluer without the dust).  There is one clear feature in the spectrum though, the bright spot in the red at the Hydrogen alpha wavelength (6563A).  This emission line comes from a rotating disc of gas around the star, the hydrogen atoms being excited by the UV light from the star and glowing in H alpha. (It is a Be star, one of many followed by amateur spectroscopists in support of professional astronomers)

Bottom is WR5 a Wolf Rayet star with a spectacular spectrum showing many emission lines. (It is visual magnitude 10.4 but most of the light is concentrated in the emission lines). Wolf Rayet stars are extremely hot (tens of thousands of degrees K) massive stars nearing the end of their life (probably destined to become supernovae.)  They are shedding their outer layers in powerful high velocity stellar winds. It is the material in these winds (made up of elements formed by nuclear fusion within the star) which produces the emission lines, variously of ionised Helium, Carbon, Nitrogen and Oxygen, excited by the UV radiation from the star.

That's a really interesting image and very useful to have a detailed explanation of what is visible.  I'm very tempted to repeat your observation through the objective prism for comparison when I'm back in the area looking at nova Persei.

It was Christian Buil who put me on to this field back in 2007 when he borrowed my Star Analyser. I have been meaning to try it myself ever since !

I love your objective prism images. The stretched wavelengths towards the blue makes the region used classical spectral classification so much clearer. Note this image is at an odd angle to fit them in the field and a non linear stretch was applied to the brightness to bring out the fainter features while not saturating W Per