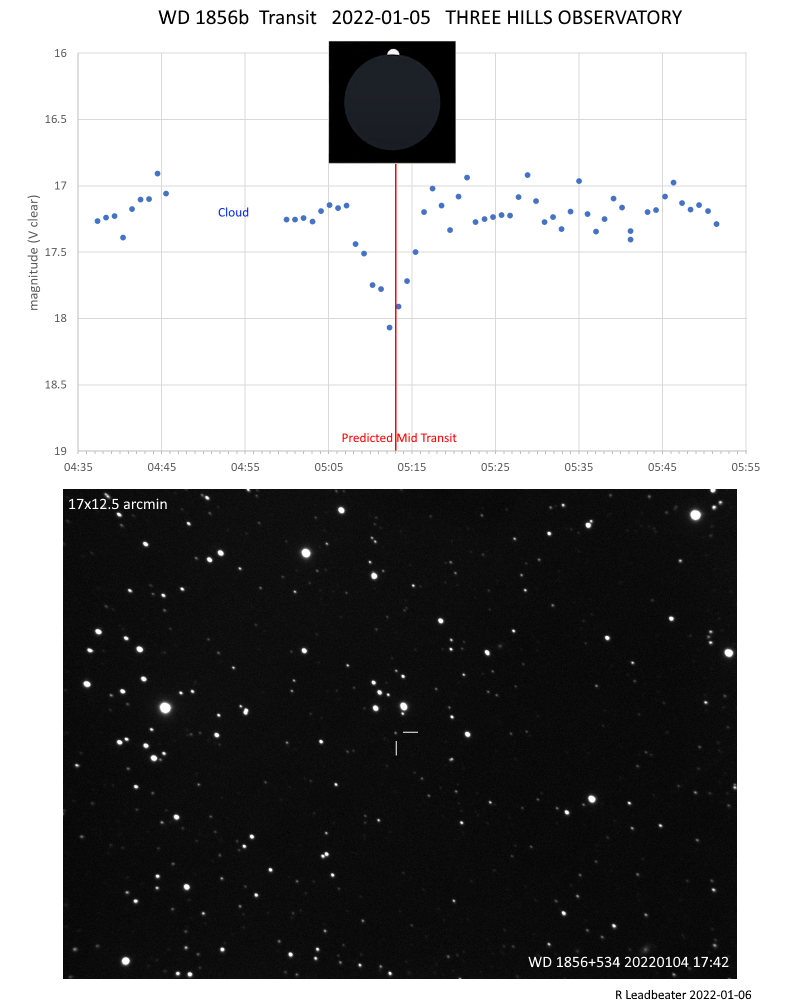 The transiting exoplanet WD 1856b is a Jupiter sized planet orbiting white dwarf star WD 1856+534 (LP 141-14) with a period of 1.4 days (1). How the planet, now orbiting just 0.02AU from its parent star survived during the star’s red giant phase is the subject of much debate. The system is a planned target for JWST to measure the transmission spectrum of the planet’s atmosphere. (2,3)

Since the planet is several times larger than the star, the transit events are perhaps more aptly described as partial eclipses, the resulting 56% drop in brightness being far greater than that of more typical exoplanet transits. The faintness of the star (V mag 17.2) and the short duration of the transit (8 mins) however makes detecting a transit an interesting challenge. Initial tests suggested 20 sec exposures would be sufficient to measure the brightness to the required precision but the higher air mass and deteriorating conditions during the transit period meant that longer 1 min exposures were needed, challenging for my unguided mount. Despite the rather low precision of the individual measurements, estimated at ~0.2 mag (2 sigma) the transit was obvious and occurred at a the predicted time. (4)

(2) JWST Proposal 2358 - Under the Light of a Dead Star: Revealing the Atmospheric composition of a White Dwarf Planet   Ryan J MacDonald

David Arditti,  Hugh Allen,  Nick James,  Mike Harlow,  Roger Dymock,  Paul Leyland,  Tim Haymes
Copyright of all images and other observations submitted to the BAA remains with the owner of the work. Reproduction of work by third parties is expressly forbidden without the consent of the copyright holder. By submitting images to this online gallery, you grant the BAA permission to reproduce them in any of our publications.