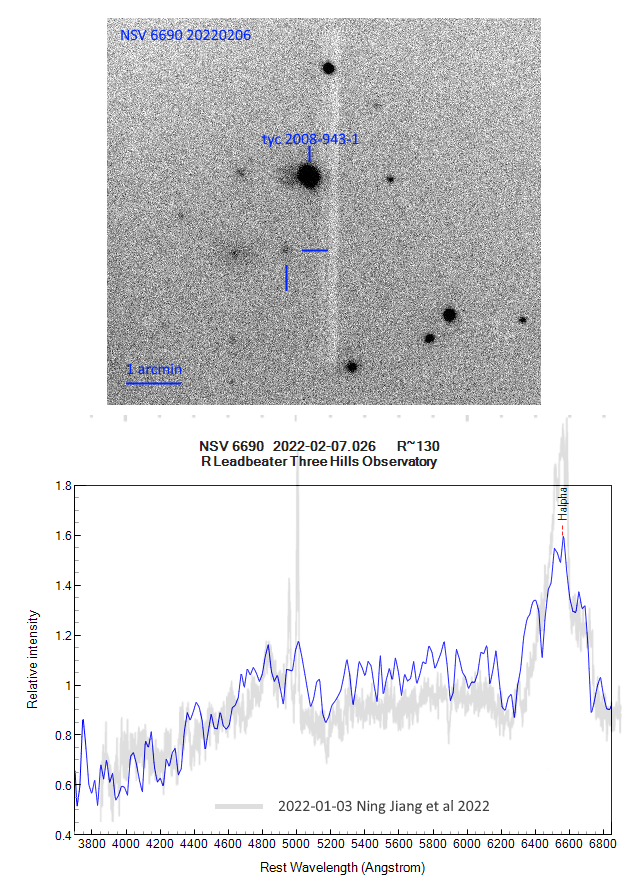 According to the recent ArXiv paper "Tick-Tock: The Imminent Merger of a Supermassive Black Hole Binary Ning Jian et all" published 2022-01-27  the mag 17 Seyfert galaxy SDSSJ1430+2303 (identified as suspect variable NSV 6690 in VSX) is home to a supermassive black hole binary which may merge in the next 3 years and possibly sooner, perhaps within 100-300 days based on the rapid rate of decay of its orbit. If it does this will be the first such event to be observed. My low resolution spectrum (blue) is overlaid on the last spectrum in the paper dated 2022-01-03 (grey).  The wavelength scale has been corrected for the 0.081 redshift, to show the rest wavelength. The spectrum shows a very broad H alpha emission with velocities up to +-12000km/s from the region of the closely orbiting black hole pair.

Eric Watkins,  David Nicholson,  Tim Haymes,  Grant Privett,  Mike Harlow,  Andrew Smith,  David Arditti,  Paul Leyland,  Hugh Allen,  Callum Potter,  Nick James
Copyright of all images and other observations submitted to the BAA remains with the owner of the work. Reproduction of work by third parties is expressly forbidden without the consent of the copyright holder. By submitting images to this online gallery, you grant the BAA permission to reproduce them in any of our publications.