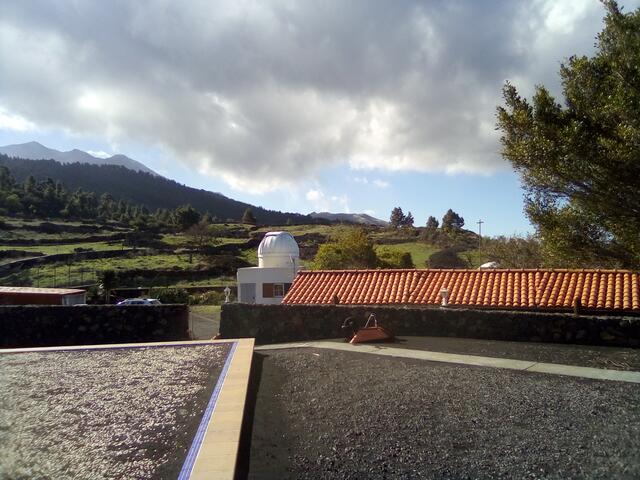 The volcanic eruption was officially declared over on 2021-12-24 but I didn't return to La Palma until a few days ago. There was quite a lot ash in the dome but none in the telescope or mount. The TCS, on the other hand, needed extensive vacuuming but still works.

Comparing the image above with the one taken at the very start of the eruption shows an addition to the sky line. It doesn't appear very impressive from here because >80% of the volcano is hidden by an intervening ridge.It makes no difference to my observable sky because it lies below the declination limit set by the mount, not that I ever image things only a couple of degrees above the horizon anyway. What I do not yet know is whether its warmth will spoil the seeing at low southern altitudes.

Steam and carbon dioxide are still being emitted from the several mouths and a few villages downwind are still off-limits. Sulphur deposits can be seen on the west (right) flank. Two of my evacuee residents left on Saturday but another will be around for at least another couple of weeks.

Alan Thomas,  Mike Harlow,  David Basey,  Nick James,  Martin Lewis
Copyright of all images and other observations submitted to the BAA remains with the owner of the work. Reproduction of work by third parties is expressly forbidden without the consent of the copyright holder. By submitting images to this online gallery, you grant the BAA permission to reproduce them in any of our publications.