Observation by Robin Leadbeater: NGC 7026 - spectra of nebula and central... 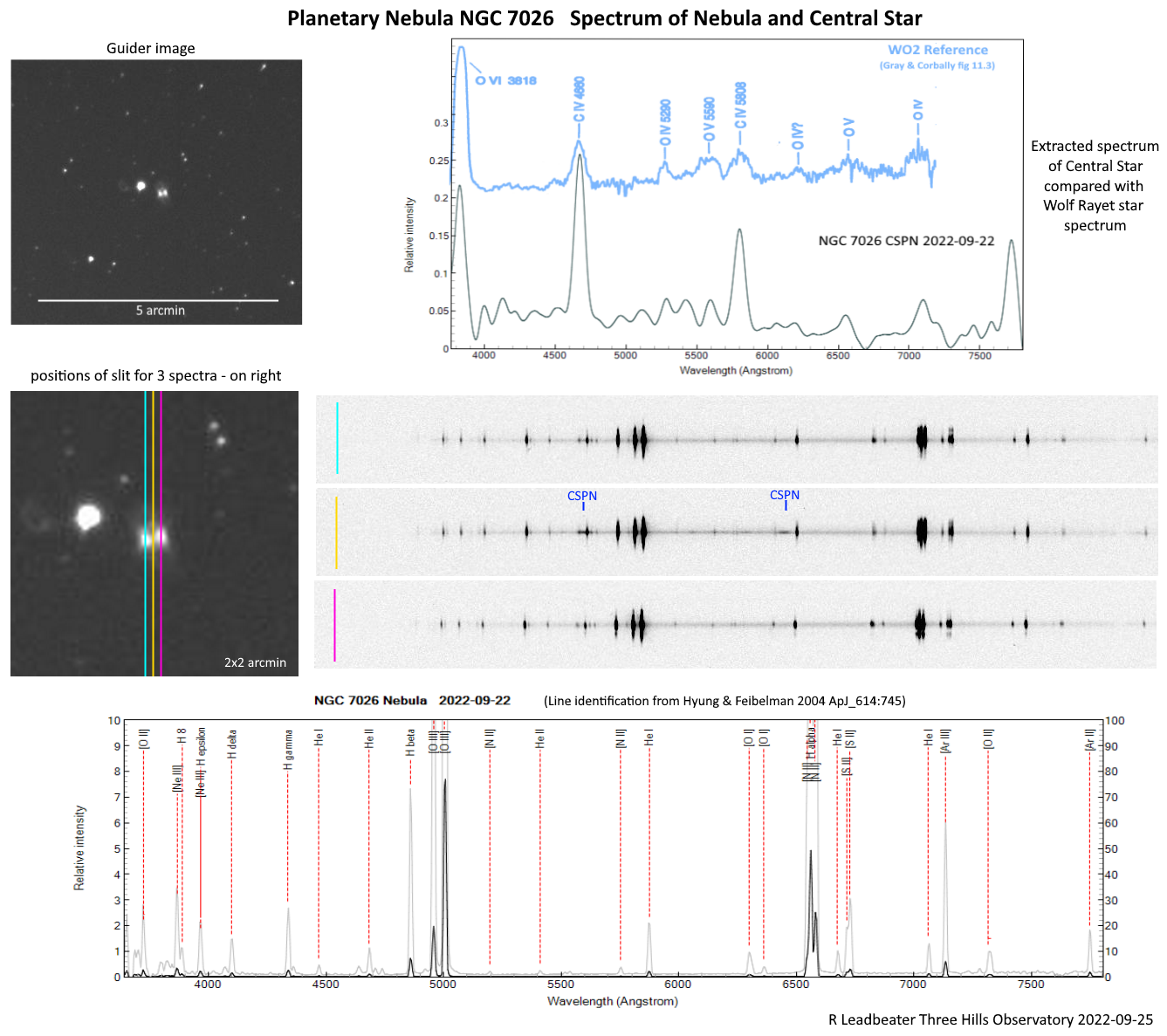 For September’s Deep Sky Section Object of Interest Planetary Nebula NGC 7026, I thought I would take some low resolution spectra. The three spectra are with the slit aligned in Dec and spaced in RA approximately 3.5 arcsec apart straddling the central region of the nebula. The central spectrum was aligned with where the ~mag 14 central star (CSPN) is located, though this is embedded in bright nebulosity and was not visible in the guider image.

As expected, the three spectra show bright emission lines excited by UV from the high temperature CSPN, both forbidden lines from various elements in the very rarefied gas and from H and He. The emission extends almost 1 arcmin in the Dec direction, well beyond what was visible in the guider image. (The relative strength of the lines can potentially be used to measure various physical parameters in different parts of of the nebula, though some key lines are blends in these low resolution spectra)

All the spectra show a weak continuum from the inner part of the nebula (Dust perhaps?)  EDIT: Not dust but the recombination emission spectrum eg https://ui.adsabs.harvard.edu/abs/1972ApJ...172..593M/abstract . The continuum of the spectrum aligned on the CSPN however shows some additional broad features, likely to be from the CSPN. (A couple of prominent ones are marked in blue on the spectrum image.) By subtracting the spectra flanking the central spectrum, the spectrum of the CSPN is revealed. CSPN spectra resemble those of Wolf Rayet stars with broad emission lines from dense high velocity stellar winds excited by the high temperature star, though the star itself is very different. (A low mass white dwarf rather than a very luminous high mass star.) The spectral classification scheme is similar, though square brackets are added to distinguish CSPN from true WR stars. From this spectrum a tentative classification of [WO2] is suggested.

Mike Harlow,  Paul Leyland,  Philip Jennings,  Callum Potter,  Andy Wilson,  Mattia Piccoli,  Hugh Allen,  Dominic Ford,  Brad Thomas,  Kevin Gurney,  Patrick
Copyright of all images and other observations submitted to the BAA remains with the owner of the work. Reproduction of work by third parties is expressly forbidden without the consent of the copyright holder. By submitting images to this online gallery, you grant the BAA permission to reproduce them in any of our publications.