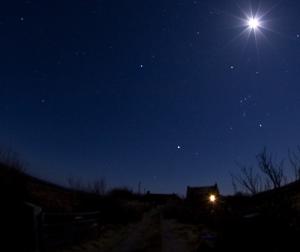 The island of Coll in the Inner Hebrides has been awarded the status of Dark Sky Community by the International Dark-sky Association, making it one of only two dark sky places in Scotland, and 22nd worldwide.

The designation follows years of work by the local Coll Dark Skies Group who have taken measurements of the darkness of the night sky over Coll, carried out an audit of all outside lights on the island, and adjusted or refitted a number of lights that had spoiled the view for stargazers.

Coll Dark Skies Group includes Julie Oliphant, owner of the Coll Hotel, Paula Smalley who runs Tigh Na Mara Guesthouse, and local stargazers Tony Oliver and Olvin Smith. Tony said: “The first winter on Coll I was in awe of the night sky, it’s on a par with many of the high arctic regions I’d visited. Soon I discovered Coll had some real star gazers which eventually led, over many pints, to where we are today. The island community is very nature aware and needed little encouragement to offer support. Now we have the opportunity to share our darkness with others and I hope anyone visiting Coll off-season will be equally inspired”.

During the process of measuring the darkness of the night sky over Coll Olvin used a sky quality meter, a handheld device which measures sky brightness. On the scale of the device an urban sky would read around 17, while a site completely free from light pollution would read 22. On several sites on Coll readings on 21.9 were regularly recorded, making Coll’s skies some of the darkest in Europe.

The group are hoping that the status as Scotland’s first Dark Sky Community will increase winter tourism, as stargazers travel to the island to see truly dark skies, free from man-made light. Galloway Forest Dark Sky Park, Scotland’s other dark sky site, has seen a boom in off-season tourism since it was awarded dark sky status in November 2009.

Argyll and Bute Council supported Coll’s application. Councilor Fred Hall said: “The Isle of Coll is a unique island in many ways, not least of which is its beautiful countryside and sea views but also the lack of light pollution. I can think of no better island in the inner Hebrides to gain the Dark Skies accolade.”

International Dark-sky Association member Steve Owens, a dark skies consultant resident in Glasgow, helped Coll in their bid for dark sky status. “This is a fantastic achievement for Coll, placing them in a very select family of places around the world that have worked to protect their night sky. The fact that the UK now has one quarter of all of the International Dark Sky Places across the globe shows that there is a real appetite here for night sky protection, and for establishing places where anyone can enjoy the wonder of the night sky.”