On March 12 we received the first UK observations of this comet. It was visible very low down in the west along with the thin crescent Moon which was less than one day old.

So far we have received positive observations from James Abott (Witham, Essex), Ian Sharp (Selsey, Sussex) and Dennis Boon. James saw the comet at 1850 UTC using 15×70 bins and estimates the coma magnitude as +1 with a 45 arcmin tail. Ian imaged the comet and has a nice photo on his website here: http://www.astro-sharp.com/images/comets/C2011L4/C2011L4-2013-03-12-19-00-IDS.jpg He comments that he had a good view in a 130mm f/7 APO and that the comet has a very bright, starlike nucleus. Dennis Boon managed to get an image of the comet and the crescent Moon in the same shot. 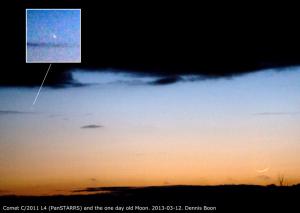 My attempts from Chelmsford, only a few miles south of James, were thwarted by a band of cloud which sank in the sky at the same rate the comet was setting. I did get a nice image of a 23hr old Moon though: http://www.nickdjames.com/Media/albums/Astronomy/Moon/Moon_20130312_ndj.jpg.

Update – March 14, 07:35 – The weather over much of the UK cooperated at just the right time last night and we have received many observations, both visual and imaging, of this comet. Many thanks to everyone who has submitted material. I had my first view last night. The comet is certainly not the spectacular object that we hoped it would be but it was still exciting to pick it up in the bright twilight. It should still be a good object as it moves into darker skies.

Update – March 16 – Have a look at the Comet Section page here to see the latest images.