A new meteor shower in Camelopardalis? 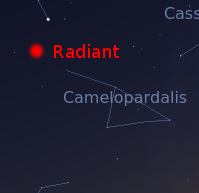 On May 24, we may be treated to the sight of a previously unseen meteor shower, the Camelopardalids.

Most meteor showers repeat on an annual basis, seen whenever the Earth passes through a stream of debris left behind in the wake of a comet. Each year, meteors are seen on the same day of the year, when the Earth returns to the same point along its orbit. And because the meteor particles are all travelling through the solar system in a common direction – along the orbit of their parent comet – they appear to diverge from the same source direction, called the shower’s radiant.

Every now and then, though, the orbits of comets can be disrupted by the gravitational influence of large planets like Jupiter. Jupiter has more mass than all of the other planets put together, and if a comet passes too close, it may get knocked onto a different orbit.

That’s exactly what happened to Comet 209P/LINEAR two years ago. Simulations of Jupiter’s gravitational pull on the wake of material behind the comet suggest that some particles moved onto a new orbit that now intersects with the Earth’s. Our first encounter with them will be this weekend, on May 24, when a shower with upwards of 100 meteors per hour (ZHR) may be seen. It is difficult to make exact predictions of how many meteors may be seen, since the debris in question is around 120 years old, dating from apparitions long before the comet’s discovery in 2004. We simply do not know how active 209P/LINEAR was around 1900.

The new meteor stream is not well placed for observation from the UK. Although the radiant is high in the northern sky, in Camelopardalis, the shower is expected to be active primarily between 06:00 and 08:00 UTC on May 24, during UK daytime. There is considerable uncertainty in these predictions, though, so UK observers are still urged to make pre-dawn observations and submit them to the BAA Meteor Section.

The radiant of the shower is expected to be around RA 08h15m, Dec +79°. It is marked by a red dot in the star chart above.

For more information about how to observe meteor showers and submit your observations to the BAA, see the Meteor Section pages.