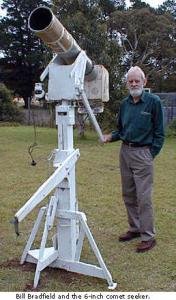 William (Bill) Bradfield, the legendary comet hunter has died after a long illness, leaving behind an unmatched legacy of comet discoveries.

The international astronomy community has lost one of its greatest comet hunters with the passing of William Bradfield on 2014 June 9 at the age of 86. Bradfield was known not only for his 18 visual comet discoveries but also for the fact that all of his comets were named for him only. He didn’t have to share any of his discoveries with any other comet hunter — a feat unmatched in comet hunting history.

William Bradfield was born 1927 June 20 in Levin on New Zealand’s North Island, and spent his early life on his father’s 160-acre farm. Bradfield went on to obtain his bachelor’s degree in mechanical engineering with an aeronautical option at the University of New Zealand. He had already decided he wanted to get involved with rocket work. Moving to Australia from New Zealand in 1951, he was employed by the Australian government as a research scientist on rocket-propulsion systems at the Department of Defence Weapons Systems Research Lab near Woomera.

During his career, he met a fellow employee, Eileen, whom he married in 1957 and with whom he had three daughters, Katherine, Carol, and Jennifer. Bradfield lived in Dernancourt, a suburb of Adelaide, South Australia, from 1953, and moved to Yankalilla outside Adelaide in 1995. His childhood fascination for astronomy was stimulated when he was still young, around 12 or 14 and the launch of Sputnik 1 in 1957 rekindled his interest. Bradfield was among the millions of people who joined the Moonwatch programme.

In 1970, when he joined the Astronomical Society of South Australia (ASSA) and purchased an antique (100-year-old) 6-inch f/5.5 telescope, which cost him $60. His interest in comets was triggered by the Great Southern Comet of 1947, the second brightest comet of the century after Comet Ikeya-Seki of 1965. The splendour of the very bright Comet Bennett in early 1970 encouraged Bradfield’s desire to find a new comet. He remembers seeing Comet Bennett with the telescope and saying, “OK, if Bennett, an amateur astronomer from South Africa could find a comet that eventually turned into a spectacular object, perhaps I can find a comet too. And this is supposed to be a comet hunting telescope.” He realised that his telescope “may be rough and ready, but you don’t need a chrome-plated telescope to discover a comet” So, armed with this short-focus refractor he set about doing a regular search on 1971 January 1 from his backyard.

One of his most remarkable comet discoveries was C/1980 Y1 (Bradfield) which was spotted using only 7×35 mm binoculars. In 2004, he received the Edgar Wilson Award for his discovery of C/2004 F4 (Bradfield). He was made a Member of the Order of Australia in 1989 for his services to science. The Berenice Page Medal of the ASSA was awarded to Bradfield in 1981 for his contribution to the discovery and understanding of comets. The main-belt asteroid 3430 Bradfield (1980 TF4) discovered on 1980 October 9 by Carolyn S. Shoemaker at Palomar Observatory is officially dedicated to him.