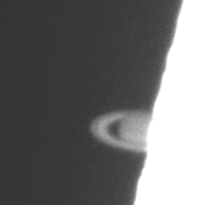 On Wednesday, Australian observers were treated to the sight of Saturn passing behind the Moon. Dave Herald, based in New South Wales, has sent us the composite image shown to the right, showing the moments when Saturn disappeared (left), and then reappeared just over an hour later (right).

He has also compiled a short YouTube video, which shows the occultation sped up by a factor of four.

Unfortunately, this occultation was not visible elsewhere in the world. The Moon is close enough to the Earth that it has a large parallax – its exact position in the sky shifts by two degrees depending on exactly where on the Earth you are standing, and this is enough to make the difference between an occultation and a close conjunction. Moreover, in Europe and the United States, the Moon was beneath the horizon at the moment of the pair’s closest approach.