This comet, discovered by the Catalina Sky survey team on 2013 October 23 was originally designated a Damocloid asteroid. Using early astrometry (including observations made by BAA Comet Section member Kevin Hills) it was found that object was actually in an orbit that was more appropriate to a comet than an asteroid but there was no evidence of cometary activity.

After the object was recovered in the morning sky following its solar conjuction in January 2014 cometary activity was visible and observers recorded a diffuse coma. Images taken whilst the comet was in southern skies by Artyom Novichonok and Taras Prystavski on 2014 May 7 show the coma well. The comet will come to perihelion on 2014 July 5 and by early June it had brightened to around magnitude 11.5 as seen in another image taken by the same observers. The comet will approach to within 0.3 AU of the Earth on July 10 and it could then be as bright as magnitude 7.  At that time it will be moving rapidly across the northern sky at around 20 arc minutes per hour and it will become circumpolar during July.  Although bright twilight skies in the UK at this time of year will diminish the view this will be a good opportunity to see this fascinating object pass across our skies.

Charts showing the comet’s position can be found on the BAA Computing Section site and an account of the discovery and subsequent evolution of this comet can be found here. Recent images will be placed in the BAA/TA Comet archive here. 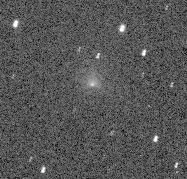