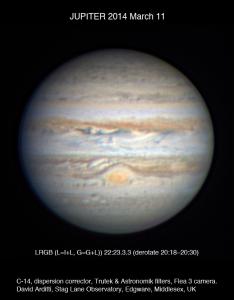 Jupiter’s particularly favourable (for UK observers) high northerly declination apparition of this year is drawing to a close. While many observers will now be concentrating their attention on Mars, and on Saturn further to the east, we would encourage attempts still to observe and image Jupiter in the western sky. In daylight, infra-red imaging with a monochrome camera can yield very good results with Jupiter still so high.

In the last few months a development of particular interest has been the evolution of new spots in the South South Temperate Belt (the dark region of Jupiter’s atmosphere south of the Great Red Spot.) These are cyclonic circularions, in contrast to the long-lived white spots in these latitudes, which are anticyclonic. The most prominent of them has been a white oval juxtaposed between two closely-spaced anticyclonic spots (known as A3 and A4, see map) but slightly north of them, earning the formation the monicker “Mickey Mouse ears” from its appearance in south at top images. Recently this oval has appeared to flatten.

The remarkable Jupiter apparition of 2013/14 is in its final stages now, but it is worth persisting with observations of the giant planet, as valuble data is still there to be gleaned on these developments.