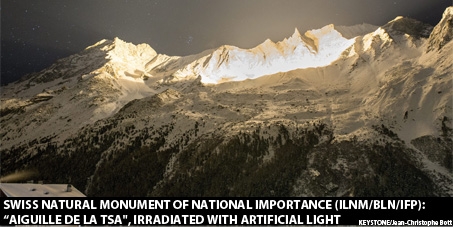 Deep sky Switzerland have launched an online petition against the use of flood lights on the Alps.

In recent years, the practice of flood-lighting the mountain landscape has become increasingly common. For example, in 2013, as many as 25 lodges were flood-lit to celebrate the 150th anniversary of the Swiss Alpine Club (SAC). According to campaigners, even if the “illumination [is] of a limited duration, … the intensity will be so strong that the mountains will be visible over a distance of hundreds of kilometres.”

The Alpine region remains one of Europe’s finest dark-sky sites, and so astronomers may wish to consider signing Deep sky Switzerland’s petition to Doris Leuthard, Switzerland’s Head of the Federal Department of Environment, Transport, Energy and Communications.