Eclipses and occultations of Jupiter’s satellites 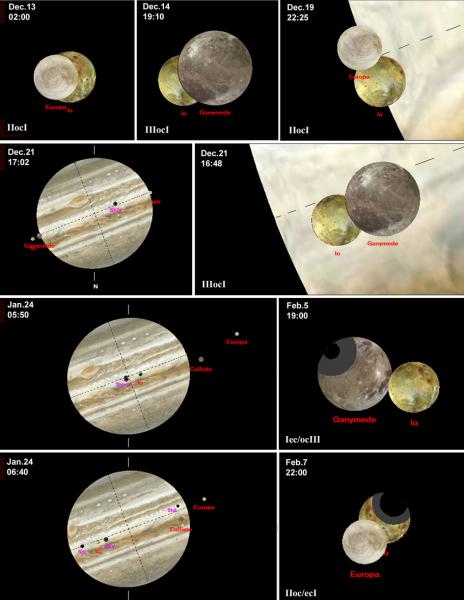 Over the next year, observers will have the opportunity to observe Jupiter’s moons passing in front of and casting shadows onto one another – so-called mutual phenomena.

Such events can be seen every six years, when Jupiter passes its equinoxes. At this point in the Jovian year, the Sun and Earth are both overhead the planet’s equator. Since the planet’s largest moons all circulate in a plane above its equator, their orbits appear edge-on at this time, making it more probable that they will pass in front of one another or cast shadows onto each other.

The panel to the right shows the circumstances of some of the best events over the next few months.

“This is an especially favourable series of mutual events”, explains BAA Section Director John Rogers. “The Jovian equinox is on 2015 Feb 5, just one day before opposition on Feb 6, so there are many events while the planet is well placed.”

“These events can be followed even with modest telescopes, especially mutual eclipses where the rapid dimming of the eclipsed satellite can be seen even if it cannot be resolved. Larger telescopes do allow the moons to be resolved, and should allow some impressive images and even videos to be obtained.”